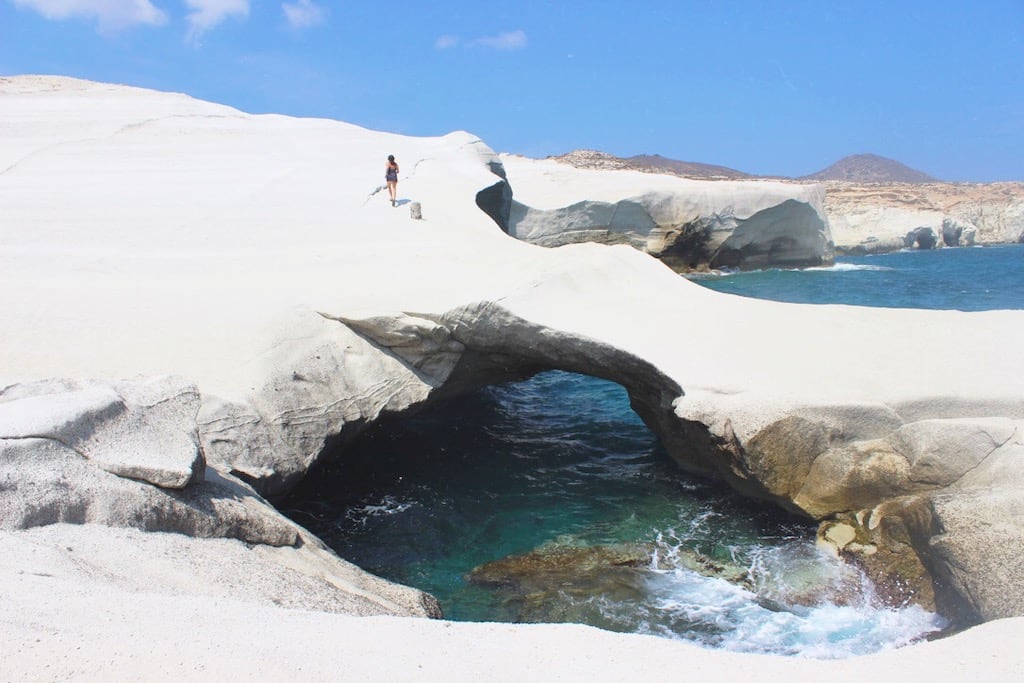 It’s no secret that the Greek Islands are incredible, but Milos was something else. The landscapes were totally unique and seriously breathtaking. It was a lot quieter than other Greek Islands and had a really nice vibe. 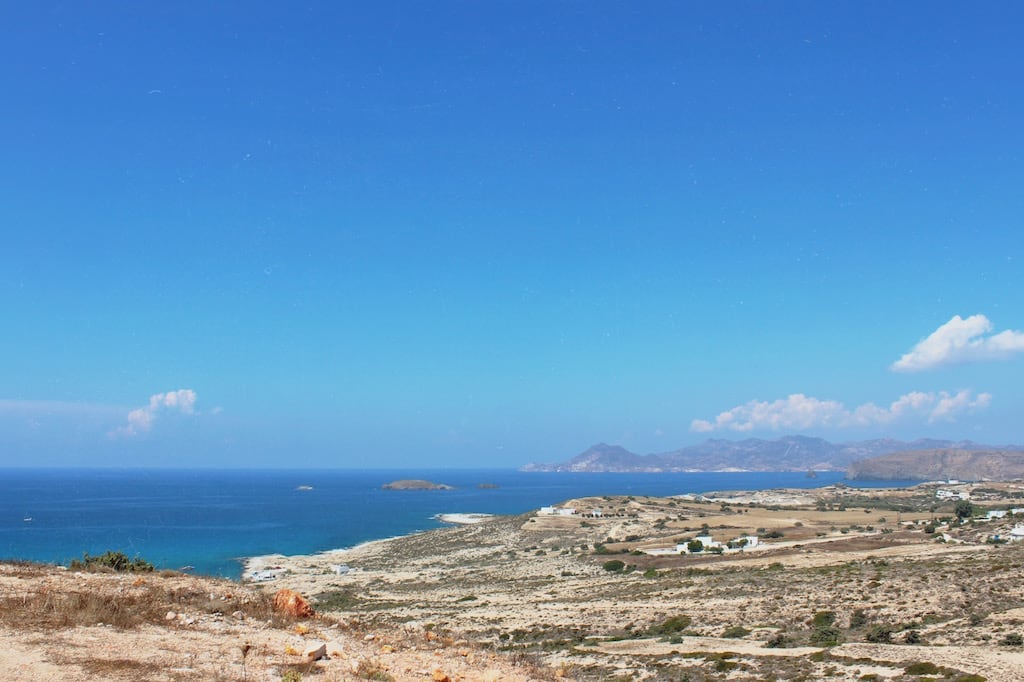 I've only been to Santorini, Ios, Kos and Milos, but Milos is my favourite by far – if you’re only going to visit one Greek Island, I recommend that it be Milos. 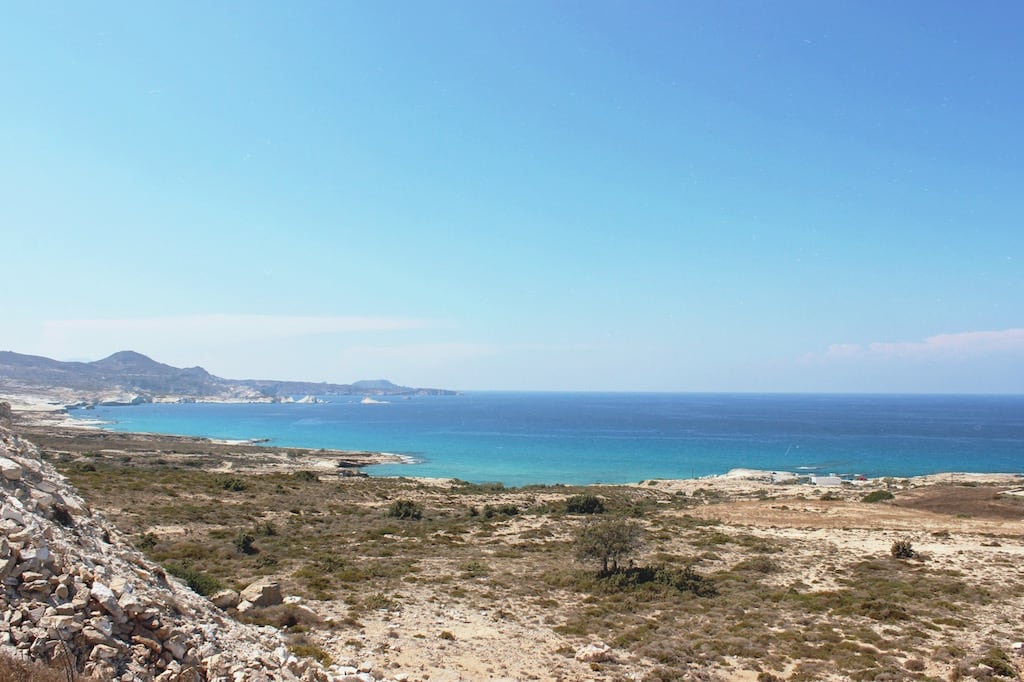 Our favourite places on the island

We spent four days on Milos, and I definitely wouldn’t have wanted any less time. We had enough time to explore all of the ridiculous landscapes on offer, but I could have happily spent a week or two on Milos just to be able to hang out and revisit our favourite beaches.

Sarakiniko, the one that looks like a moonscape, is probably the most iconic ‘beach’ on Milos. I loved Sarakiniko so much that I insisted we visit three times. On the first day, it was completely crowded but the conditions were perfect for cliff jumping and we spent the day jumping off the little cliff and watching people brave the giant one.

Another night we came back for sunset and it was such a lovely spot to watch the sky turn pink. Would highly recommend.

The major drawback of Sarakiniko was the amount of plastic rubbish there was in the water. Right in the area where everyone was swimming, there was a mini island of plastic that was accumulating because of the tides. This was honestly really depressing and such a visual reminder of just how messed up single use plastic is.

Papafragkas is a pretty cool ocean trench. At the very least, you want to stop here to check it out (and take a few photos).

We didn’t end up swimming at Papafragkas and instead rode around the cliffs a little bit and found a beach that was more open and sandy. We swam for hours – we literally put on our goggles that we packed from home and went for an ocean swim across the bay. 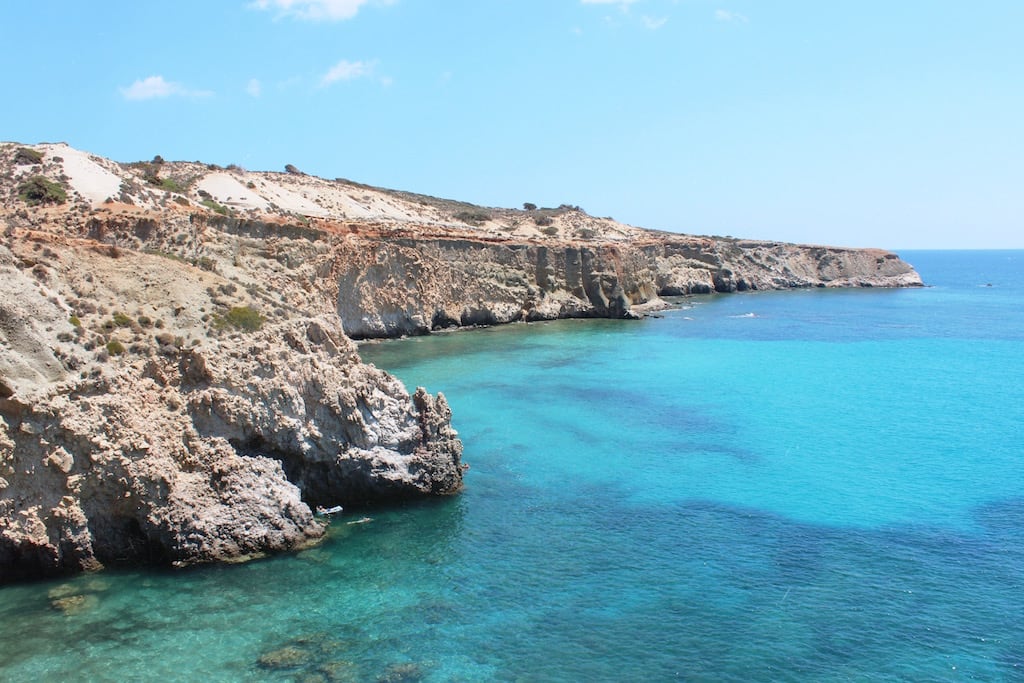 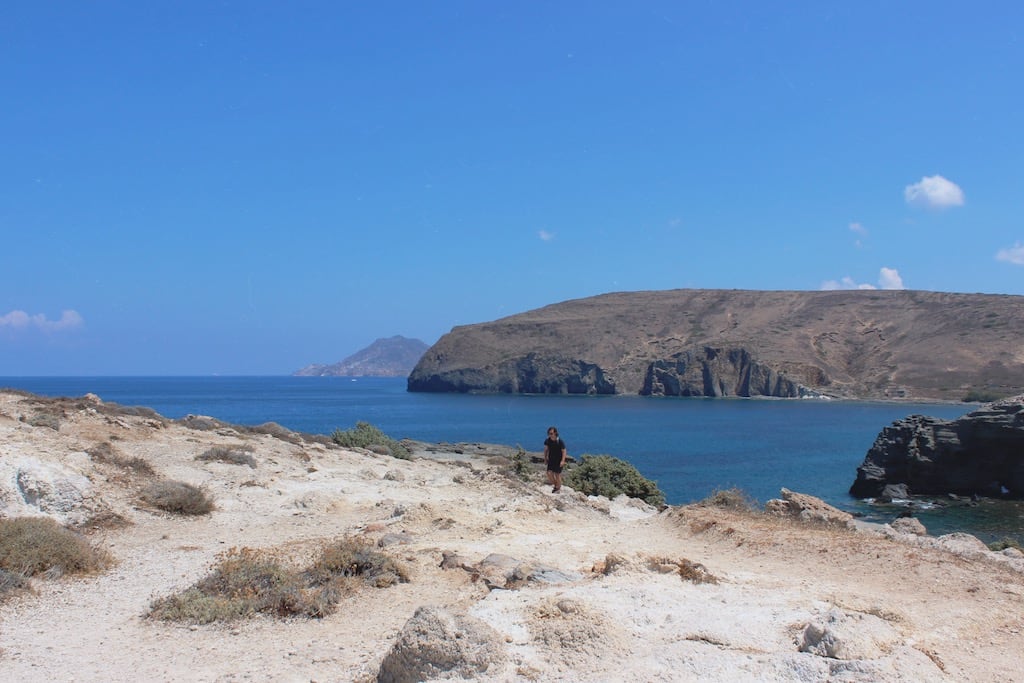 Tsigrado is a small cove located on the South coast of Milos and is one of the coolest beaches I’ve visited. Access is difficult; you have to climb down two wooden ladders that are somewhat precariously mounted on the cliff side but it’s totally worth it once you reach the bottom. Tsigrado is far less crowded than a lot of the other beaches and we spent an entire day there (mostly because I fell asleep and woke up four hours later ooops). 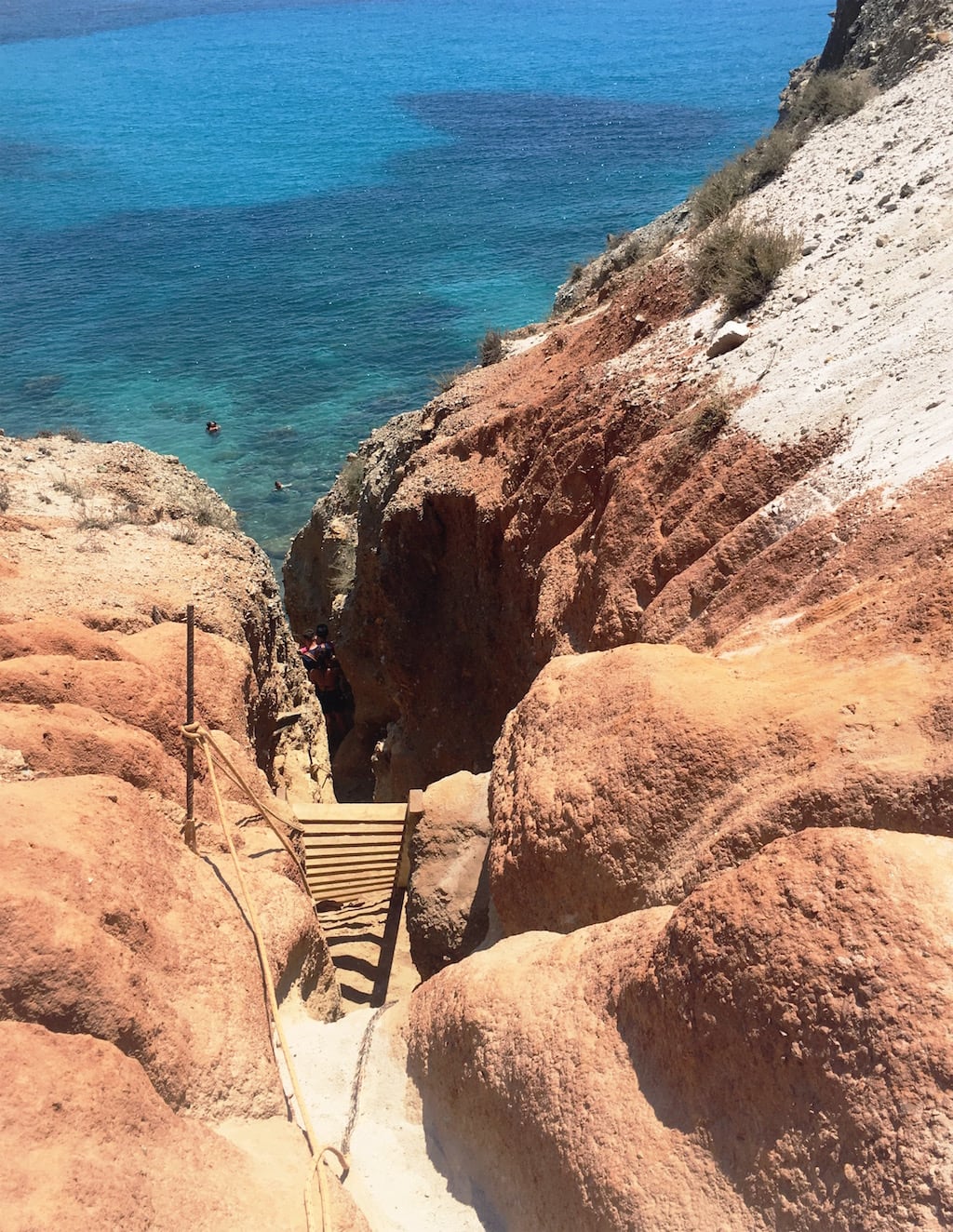 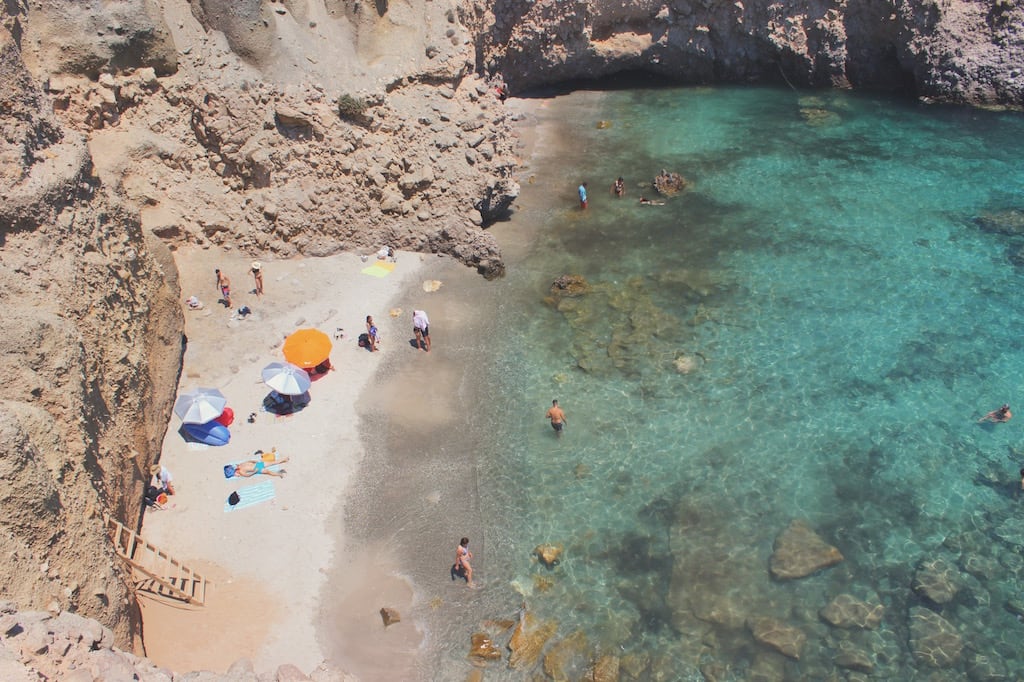 Once a pirates’ hideout, Kleftiko is now a popular cove, famed for its crystal clear water and the white rock formations that protrude from the ocean.

It’s only accessible by boat which means that you have to do a tour to get there. We were a little hesitant at first, but I read a few blog posts about it and everyone was raving so we decided to fork out the 25 euros (~$38AUD). 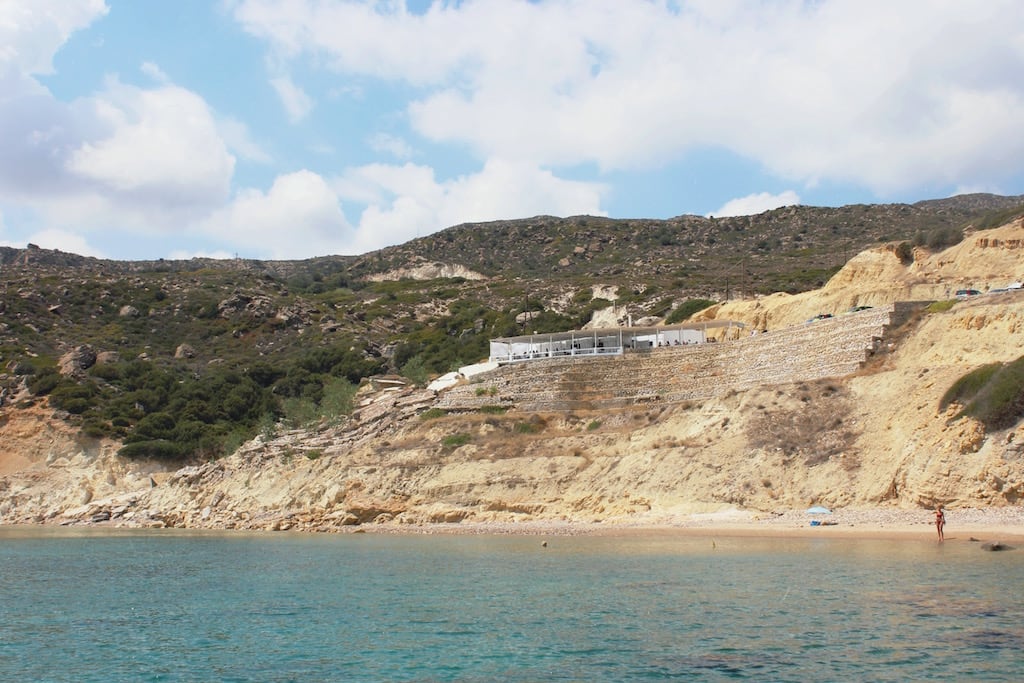 Swimming in Kleftiko ended up being one of the highlights of the entire trip. Once we sailed around to Kleftiko, the boat stopped for two hours for us to go swimming. The water was ridiculously clear and we had so much fun swimming in and out of the caves and sunbaking on the rocks.

We also rode up to Plaka and had a wander through the streets. 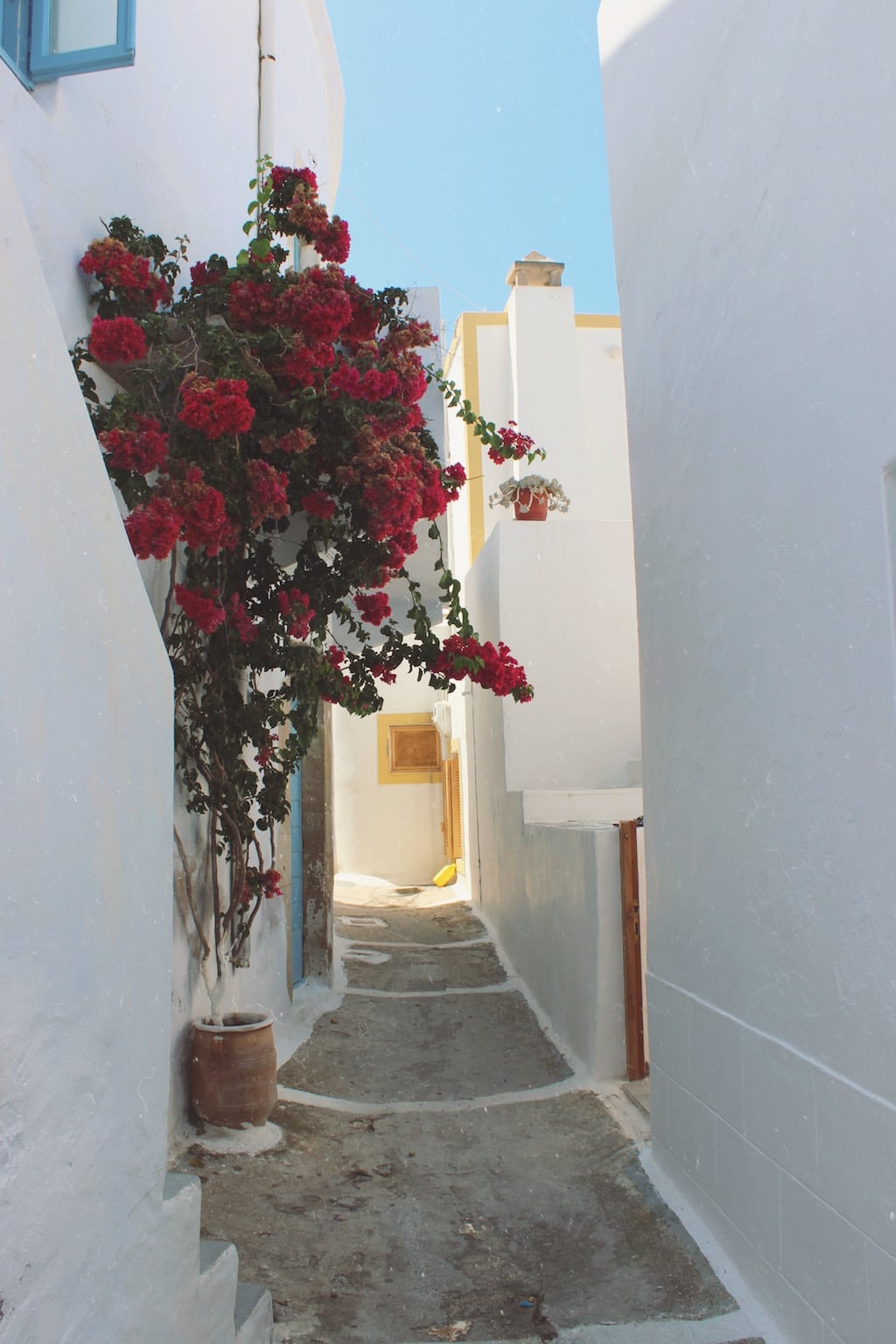 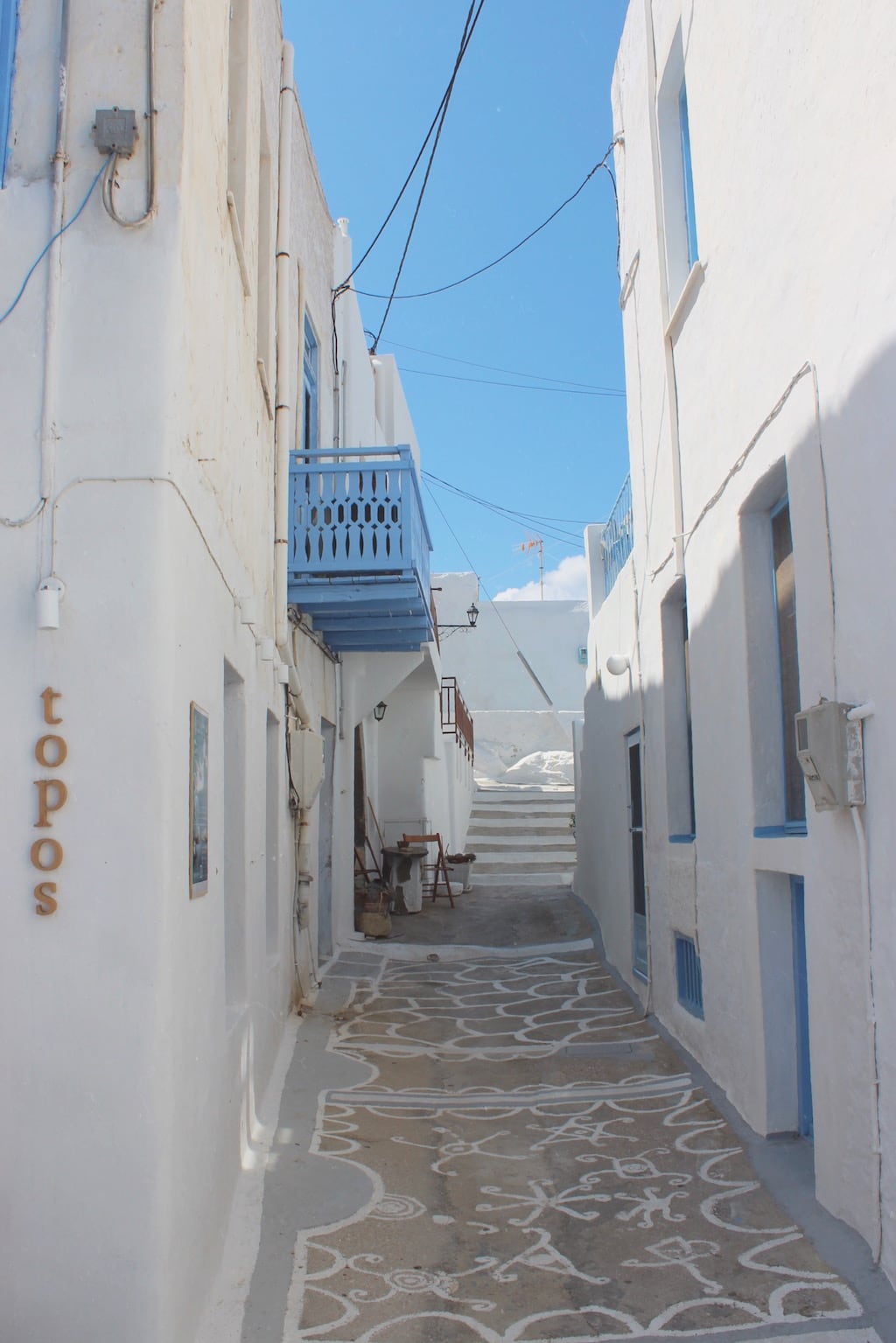 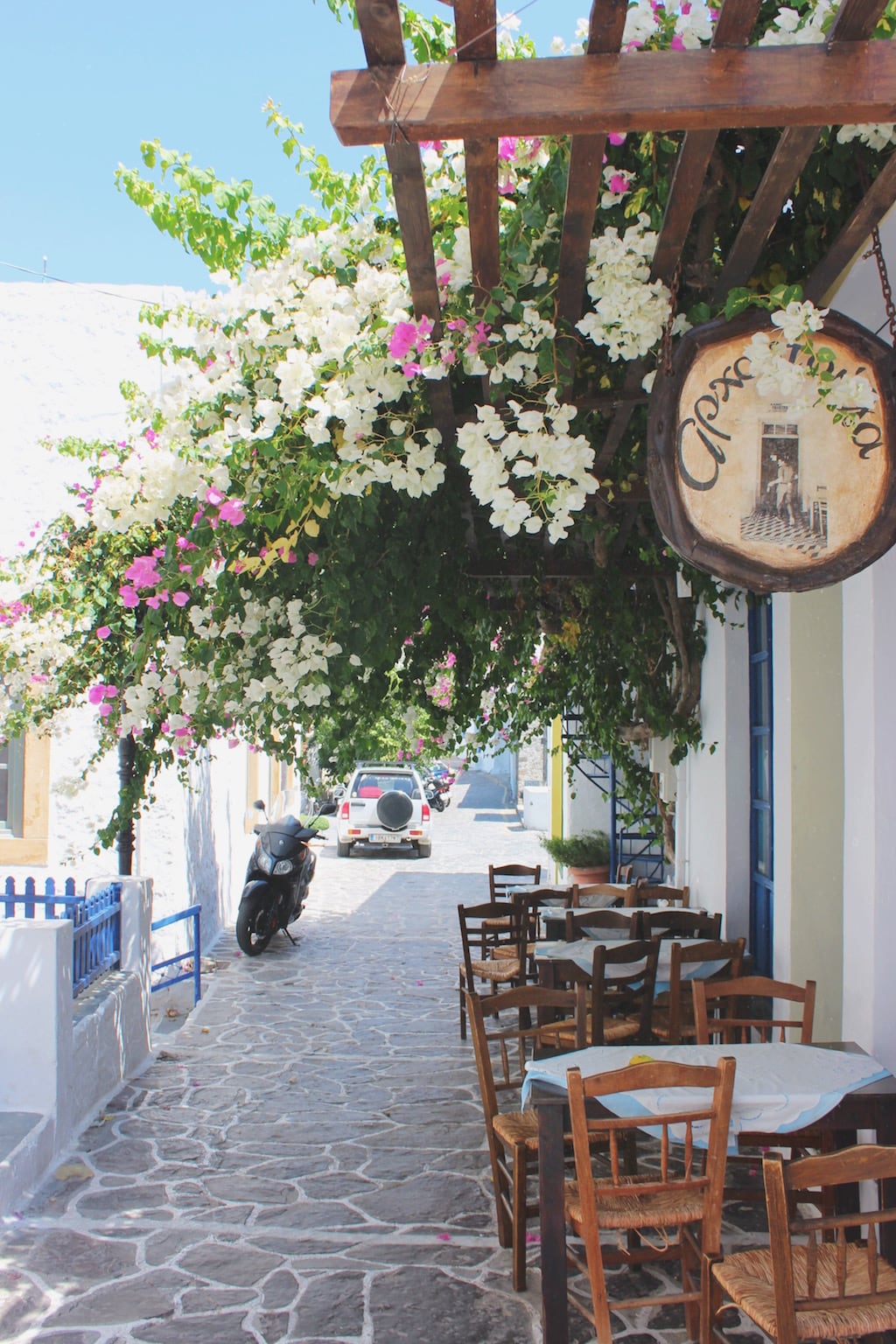 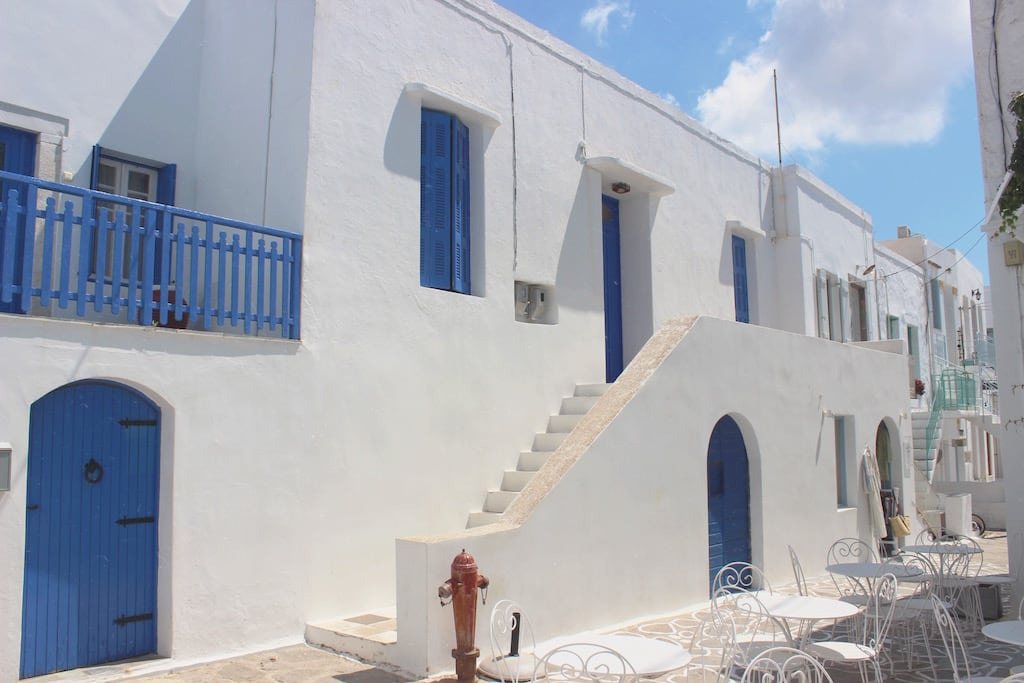 Based on my sister’s recommendation we stayed in Adamantas, the port town of Milos. I’d recommend staying in this area as it’s central to the various beaches you’ll want to explore, has lots of shops and restaurants, but still doesn’t feel overly crowded. In reality though, Milos is quite a small island so as long as you hire a mope/quad, you'll be totally fine if you stay in Plaka, Polonia, or any other town. If you're going to rely on getting around by bus though, definitely stay in Admantas as this is where all the buses leave from.

We decided to splurge a little bit in Milos and book a relatively nice guesthouse. Prices vary wildly depending on which month you visit, but we stayed at Soulis Studios and paid 226 euros for 3 nights (~$55AUD per person per night). We were really happy with where we stayed, plus, it had a beautiful balcony looking over the ocean. 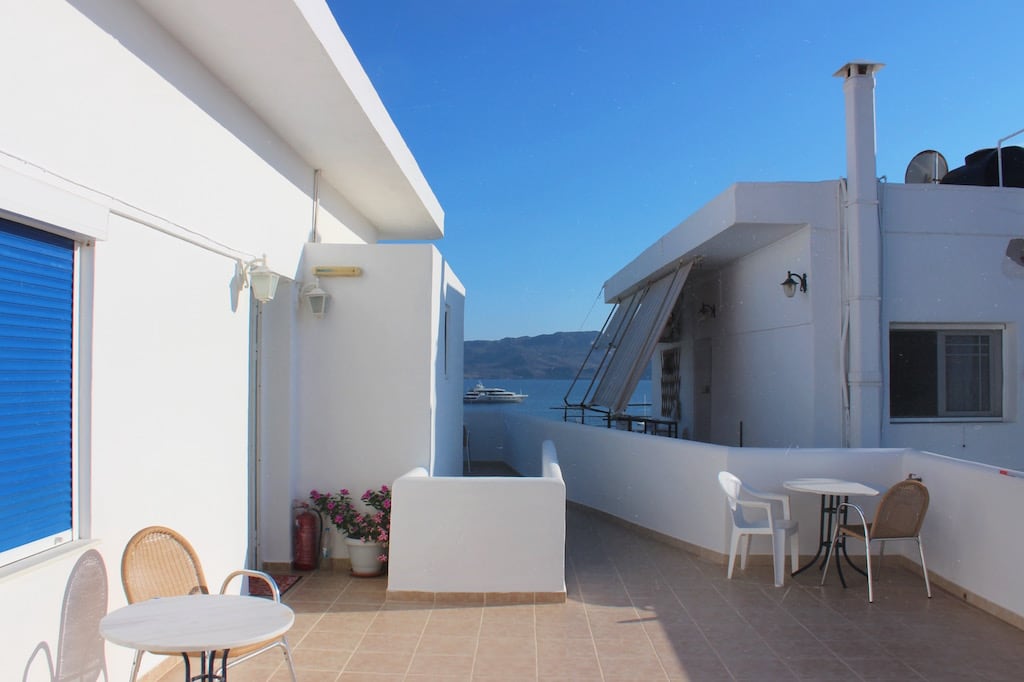 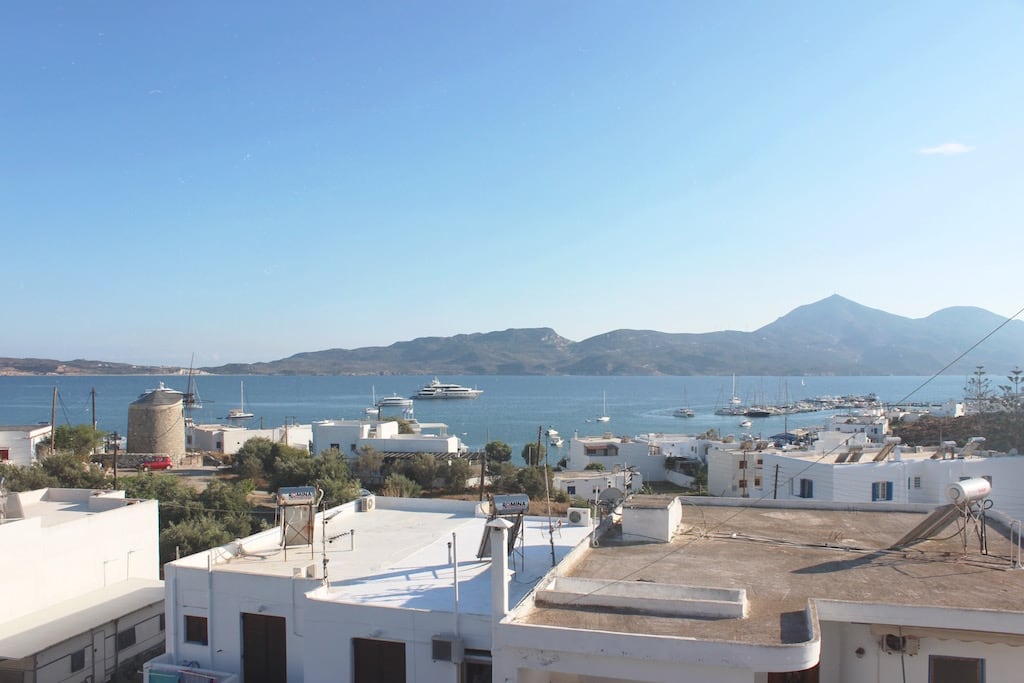 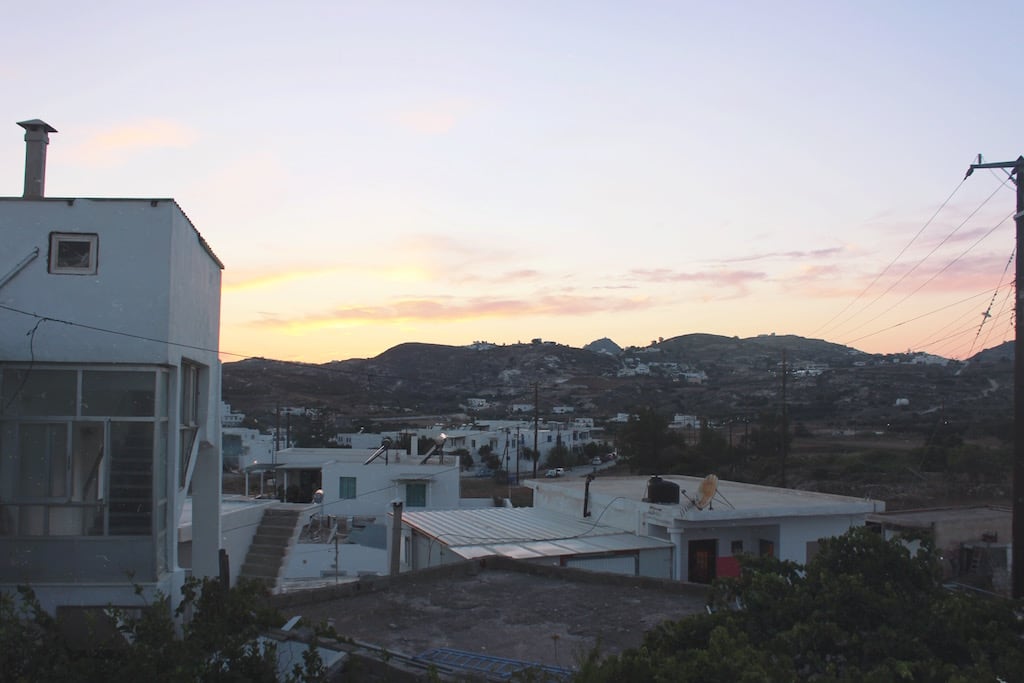 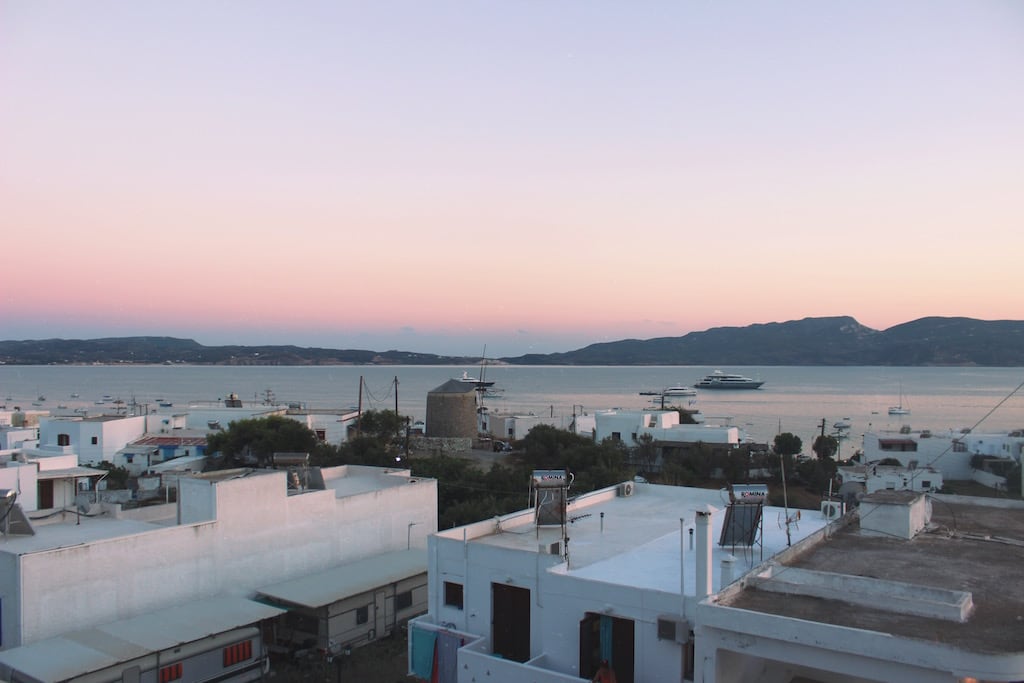 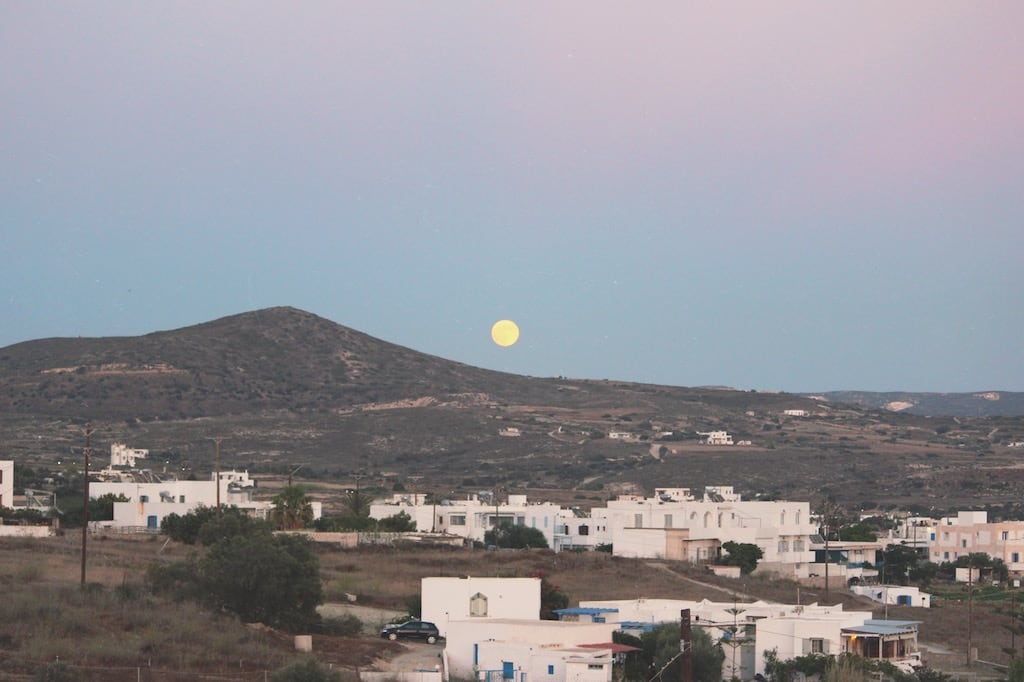 It was also in a good location in a cute little neighbourhood. 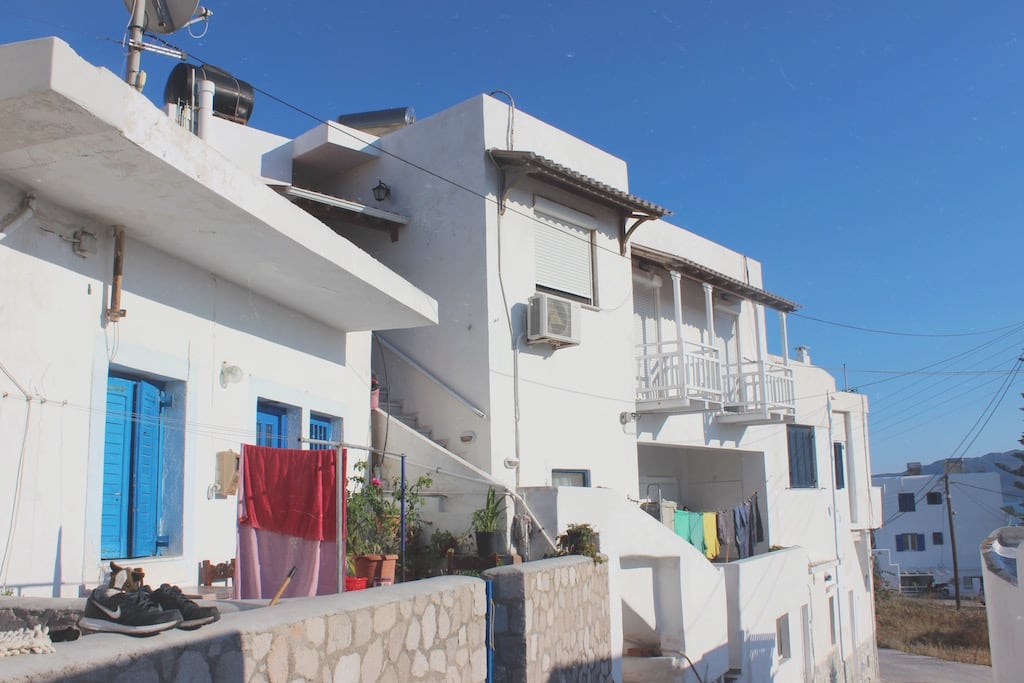 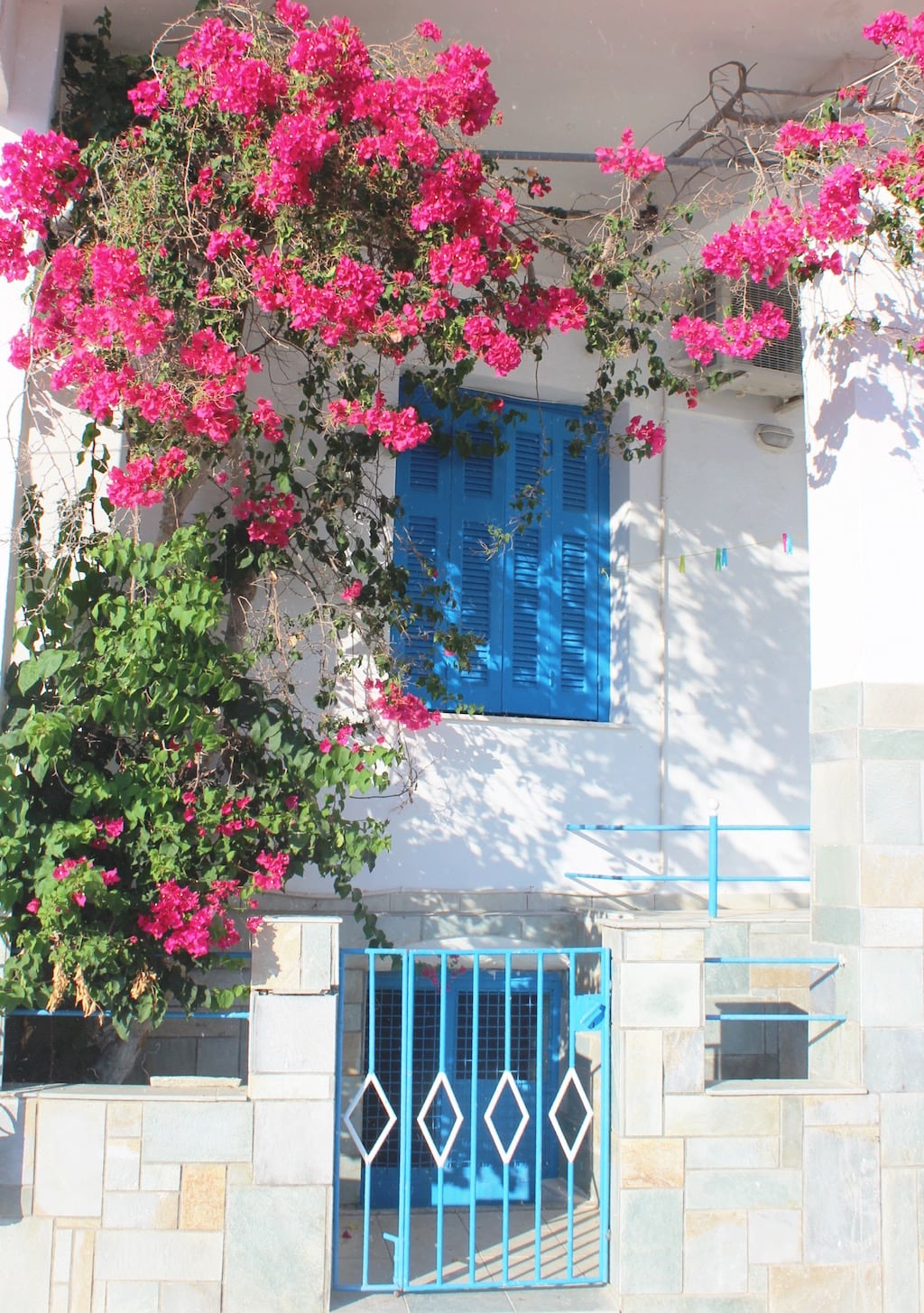 On our first day in Milos we stumbled across Artermis Bakery down by the port. They sold lots of baked goods, but the focaccias caught our eye, and much to our delight they happened to be vegan. Every day we stocked up on a mix of olive, and tomato & capsicum focaccias for breakfast and lunch. They were ridiculously good and despite the fact that we pretty much rolled off Milos as one big pile of bread, eating the focaccias for breakfast and lunch everyday was a great way of keeping costs down (each focaccia was huge and only cost 2 euros). They were great too because they were easy to pack to eat at the beach.

On our first night, we wandered down to the seaside to check out a cute little restaurant, lit up by fairy lights, that we’d driven past earlier that day. Mikros Apoplous, Apodo and Trapatseles are all next to each other and offer a similar menu. We chose to eat at Apodo because their vegan options looked the best. We happily watched the sunset while eating beautiful stuffed tomatoes and capsicums with Greek oven baked potatoes. We had such a lovely time that we came back every single night. It was great value too – a starter and two mains always came in at less than 20 euros. 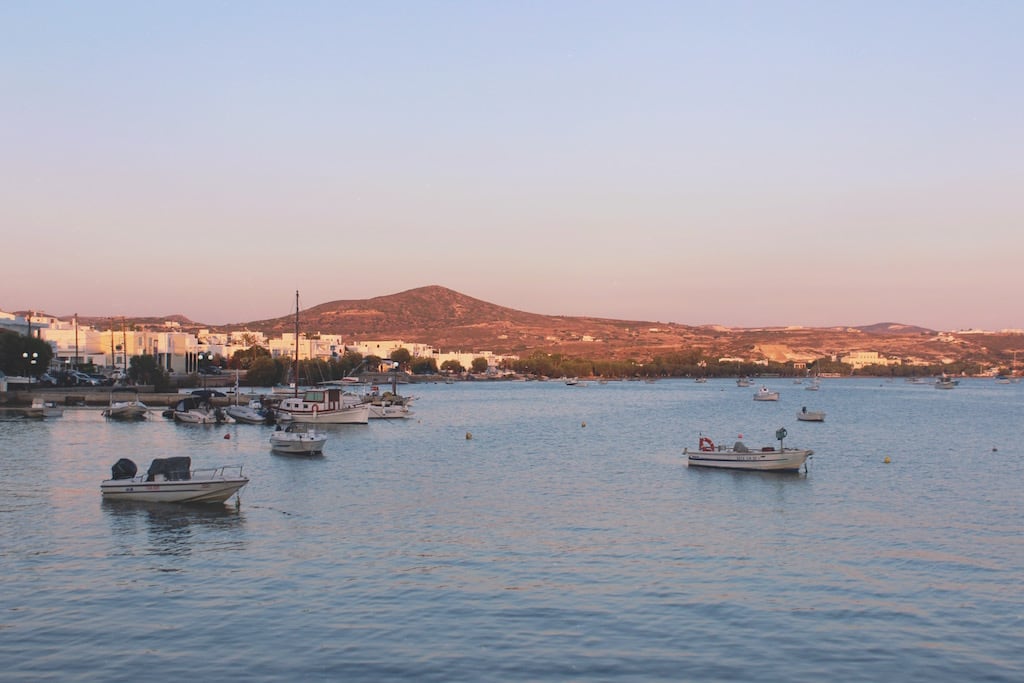 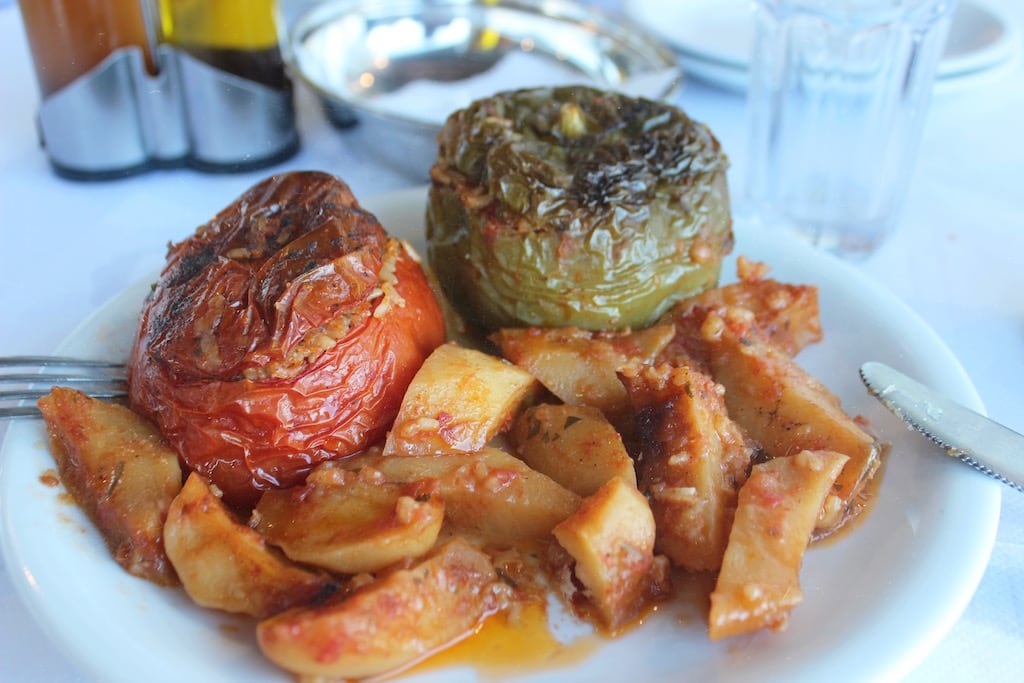 Overall, it was easy to eat (relatively) cheap in Milos and we had no trouble finding vegan food. Each day we normally spent ~15 euros on our meals.

How we got around

The easiest and most cost-effective way to get around Milos is hiring a moped. The roads are quiet and riding from beach to beach was so much fun!!! Buses don’t run to many of the beaches that are off the beaten track and considering that these are some of the best beaches on the island, you don’t want to miss them! If you don’t hire a moped, the other option is taxis but this would get crazy expensive.

We decided that it wasn’t worth hiring a moped on our first day so we just got the public bus from Admantas Port to Sarkiniko and back which was only a 10-minute drive. The buses run every two hours and cost ~2 euros (~$3AUD).

For the rest of our time on Milos, we hired a moped and rode all over the island. From memory, it was around 20 euros (~$15AUD each) per day for moped hire. It's worth noting that we could only hire one because I had an international driver's license and we met some people who had to catch buses/taxis all over because they hadn't been able to hire a moped or quad. We also would have only been able to hire a very low power moped if I hadn’t had my motorbike license. If you want to know more about international driver's licenses, I wrote about them here. 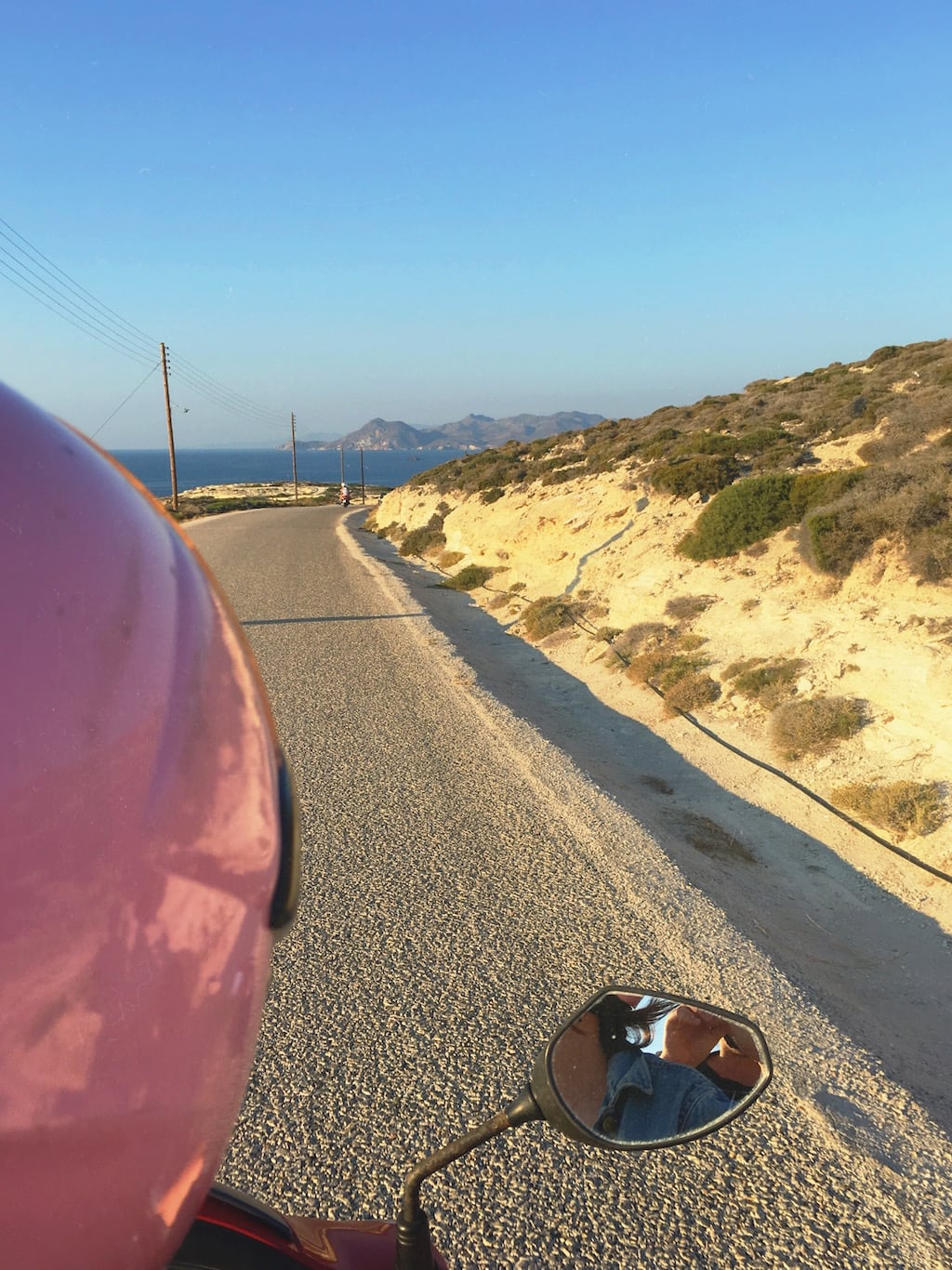 How we got to & from Milos

Milos is part of the Cyclades group and is well connected by both air and sea. Since it was the first island we visited, we decided to fly from Athens to Milos. We flew with Sky Express and the flight was only 20 minutes long (on a tiny plane that I hysterically laughed on the entire journey because I was too scared to even cry). We paid $130AUD each for the flight. Otherwise, you can get a ferry from Athens to Milos which takes around seven hours. 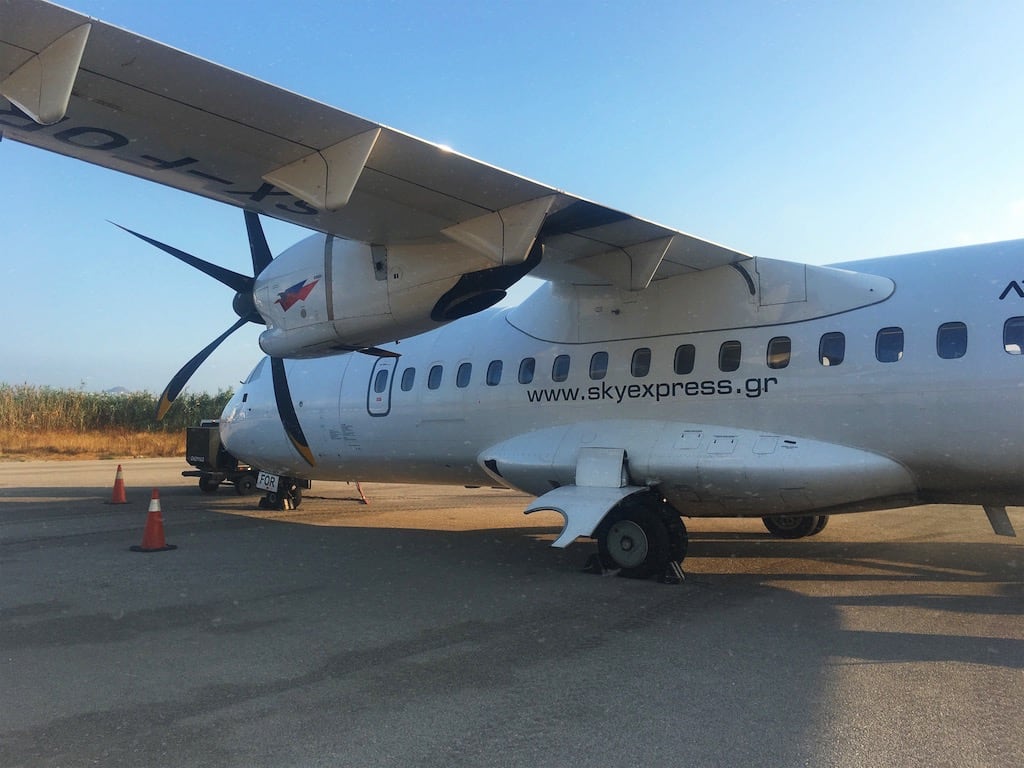 After Milos we headed to Ios by ferry which took 3 hours and 15 minutes. I found the ferries in Greece to be frustratingly expensive (it was high season when we were there). We paid 50 euros each (~$77AUD) for this ferry.

Milos is well connected by ferry to all of the Cyclades islands so you shouldn't have any trouble hopping from island to island.