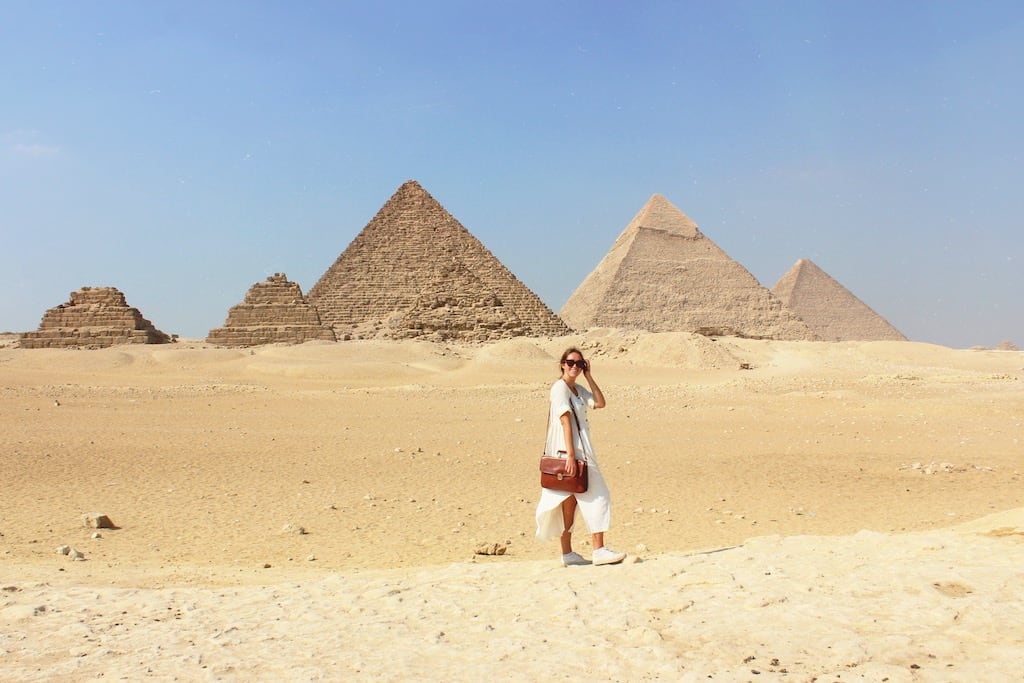 Cairo & The Pyramids of Giza

We travelled to the Middle East because I was so excited by Jordan, but once I realised that Cairo was less than 1000km from Amman, I couldn’t let go of the idea of exploring the pyramids. Given that this was an add on to our planned trip to Jordan, we didn’t have nearly as long as I would have otherwise wanted to spend in Egypt. We settled for 4 days in Cairo and Giza, which ended up being a really lovely amount of time there. It definitely left us wanting to see more of Egypt, and although I was a little intimidated by Egypt initially, I felt really comfortable traveling there. Top of my list is to go diving or snorkelling in Dahab, and to explore the ancient wonders in Luxor, Abu Simbel and Aswan.

Cairo is a huge sprawling city and seemed pretty rundown. All the buildings are brown, the smog is really noticeable, and yet on our drive out to Giza we spotted several pockets of lush green farmland. It really has a vibe though, and it was an exciting place to be (lots of sensory overload!). Tourism in Egypt has suffered dramatically since the Egyptian Revolution (25 January Revolution) in 2011; we saw no other tourists when walking around Cairo, and there were probably only around 40 people at the pyramids, which is insane for an Ancient Wonder of the World. We experienced only kindness from everyone we met in Egypt, and although the touts at the pyramids were intense, they were pushy in a very light-hearted way. 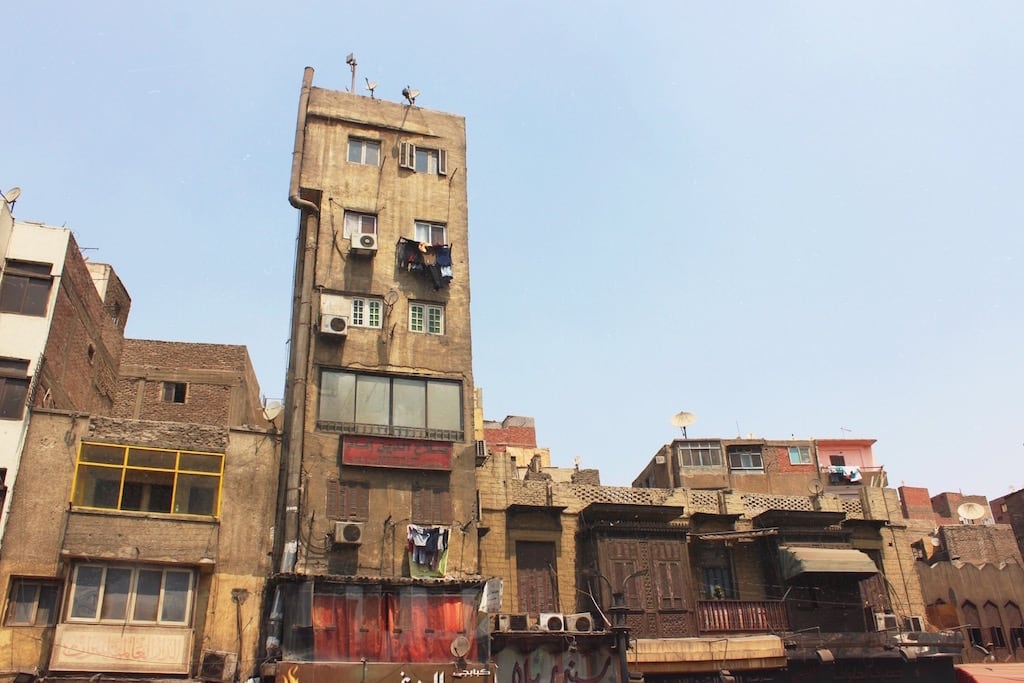 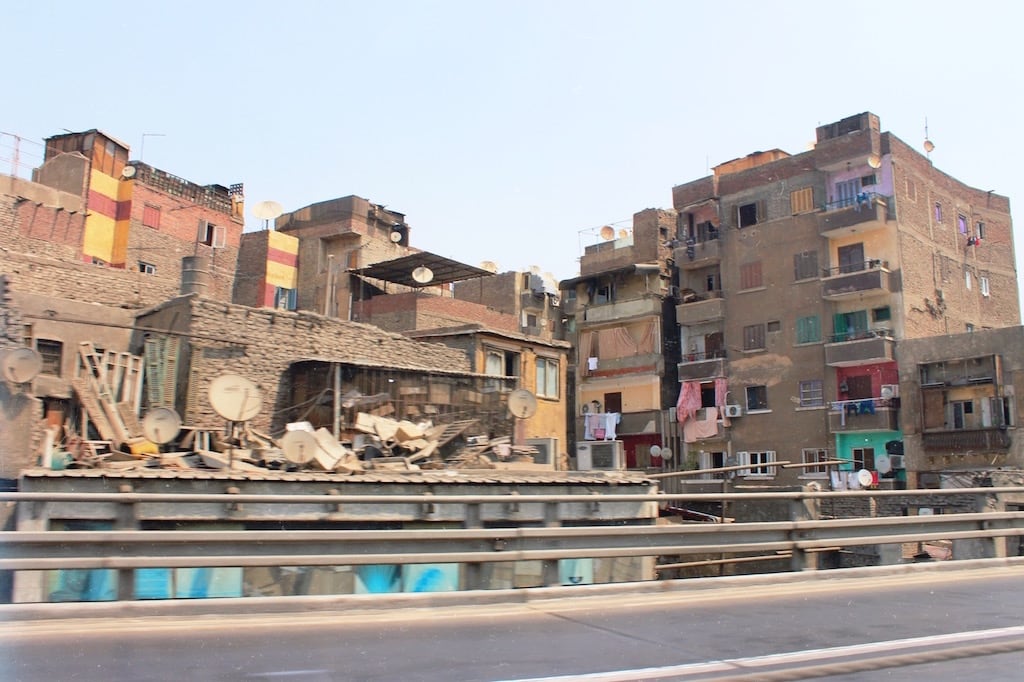 We moved around when we were in Egypt; we spent a couple of nights in a hostel in central Cairo, and then treated ourselves to two nights of luxury.

There are so many budget options in Cairo, but upon recommendation we stayed at Meramees Hostel in central Cairo, only 10 minutes’ walk from the Egyptian museum and Tahrir Square. This hostel has beautiful high ceilings, a cosy common room with friendly staff, and a cute little balcony looking out over Cairo. The biggest downside is that you have to climb six flights of stairs to get up there – not the end of the world, but could be a deal breaker if you’re traveling with a big suitcase or lots of luggage. We paid 300 EGP for a double room (~$12AUD each) . 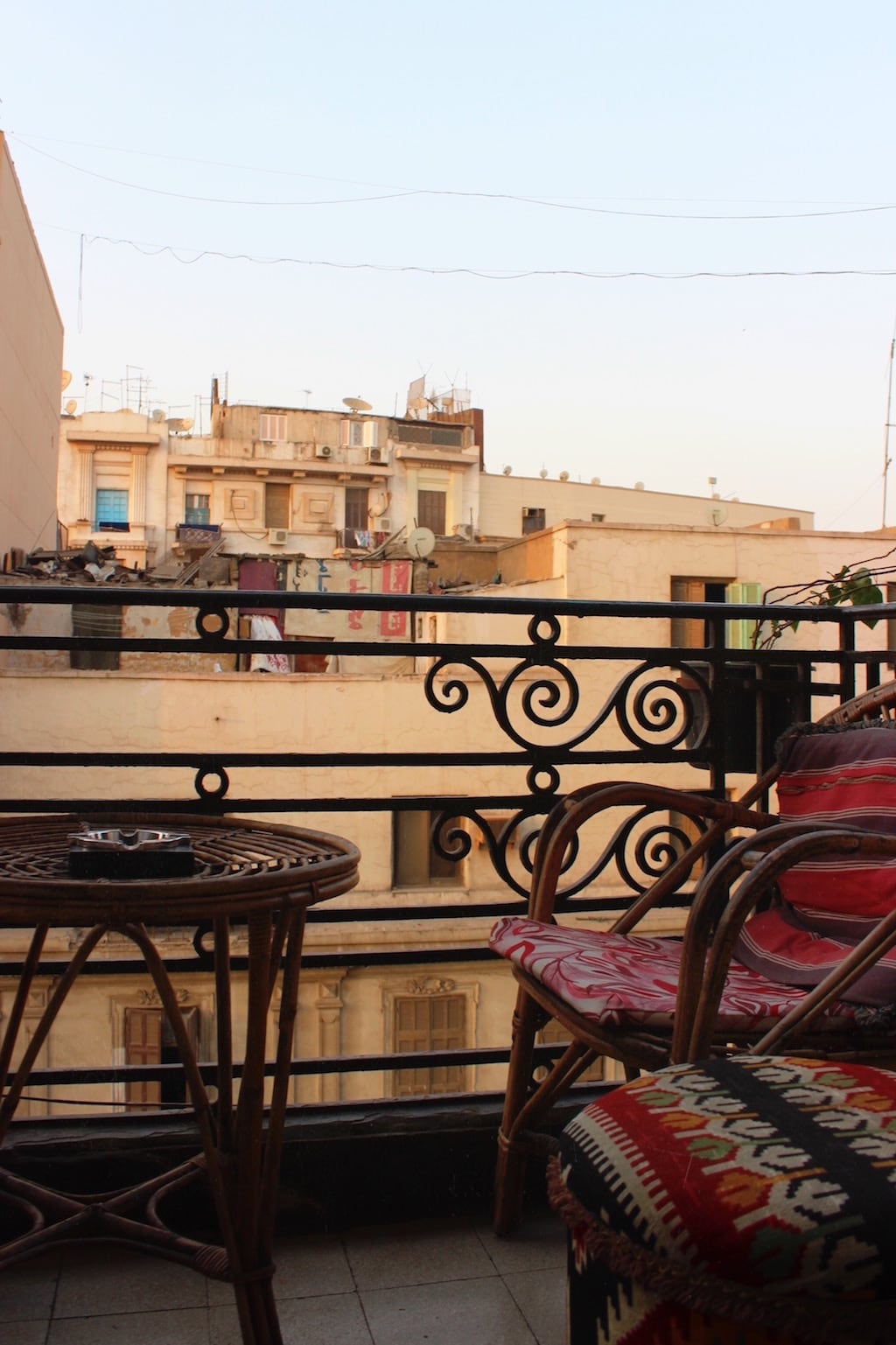 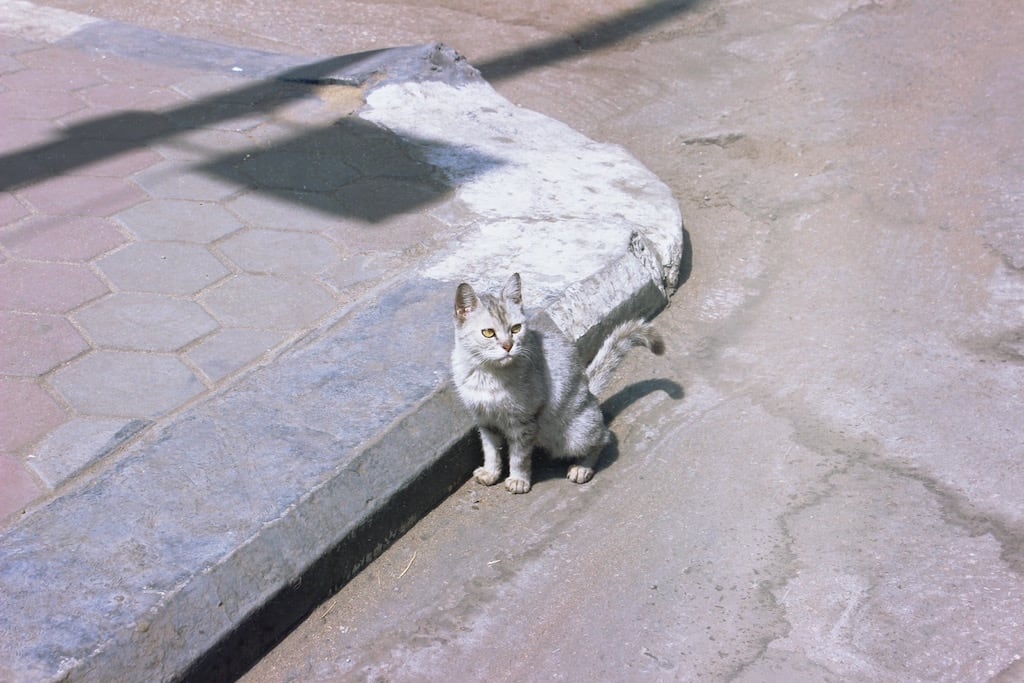 We then spent 2 nights at the Marriott Mena House in Giza as a treat. If you’re looking for something a little more bougie, I can’t recommend it enough. The grounds are incredible: well-manicured lawns, beautiful gardens, a fancy swimming pool and a gym & sauna. 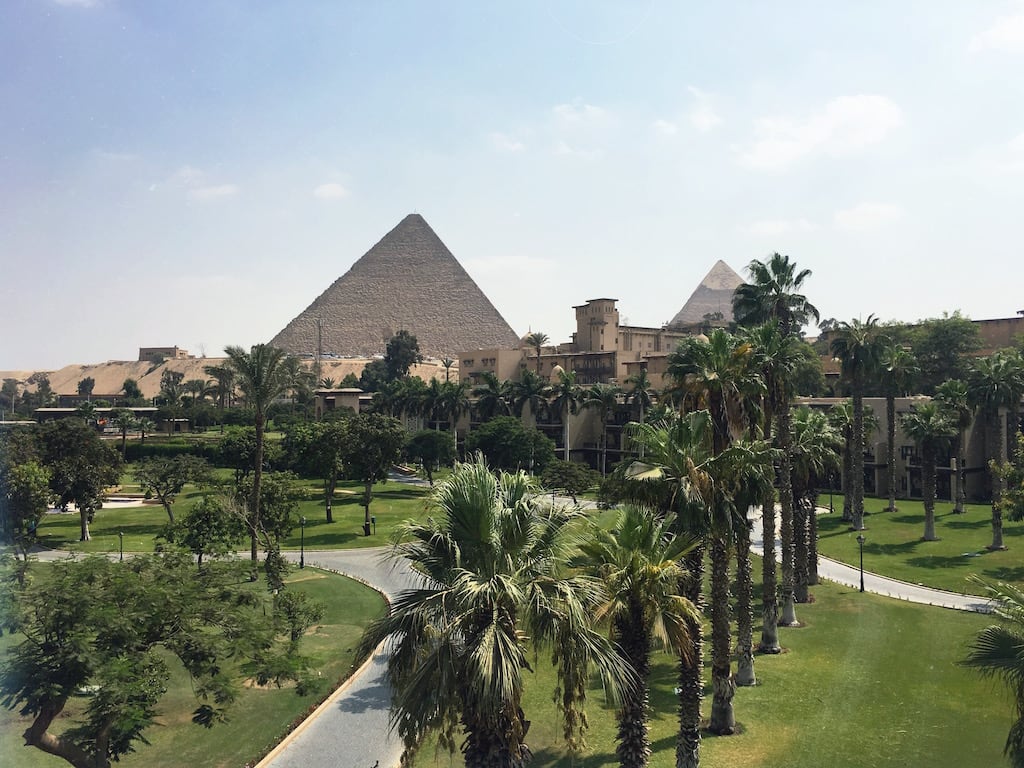 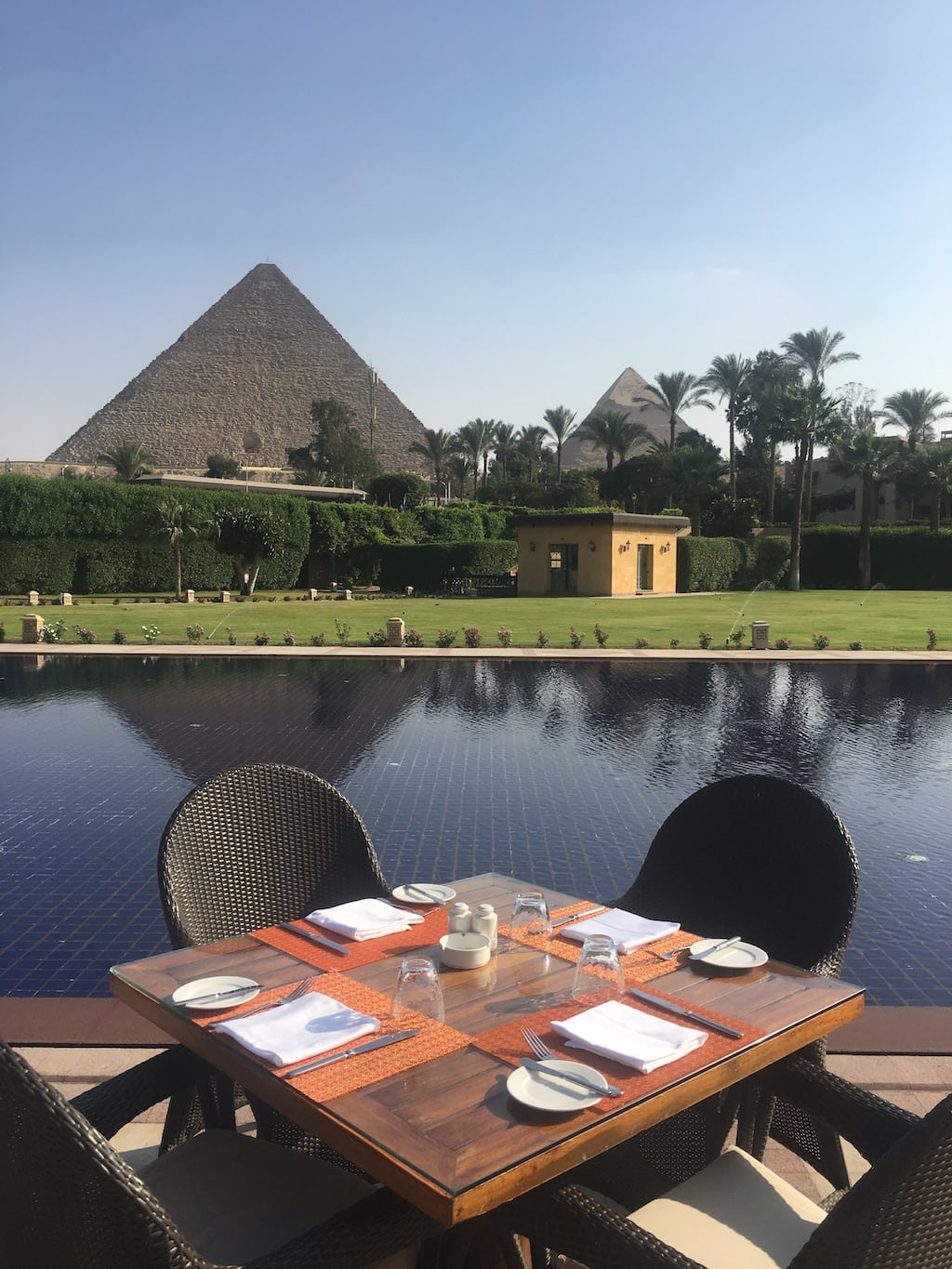 Not to mention that we literally had a private balcony that had an incredible view of the pyramids. (If you decide to stay there, request room 438 – it’s on the top floor and at the perfect angle to see the Great Pyramid). 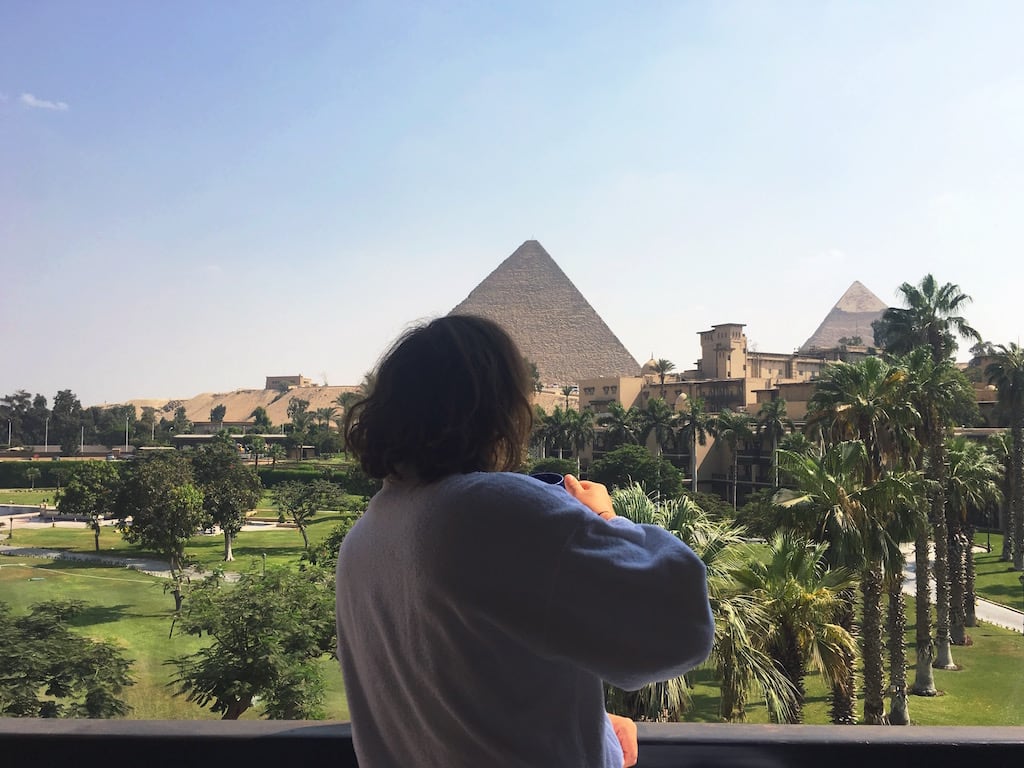 We scored a last minute deal on Booking.com and paid $175USD per night (~$120AUD per person). As an aside, the security here was really stringent: a sniffer dog inspected the taxi and our luggage when we arrived, and to enter into the reception and the hotel room building, our baggage had to be scanned and we had to go through a metal detector.

You can’t go to Egypt and not see the pyramids. I’d recommend at least 3 hours to explore, although we actually visited them over two days and spent a total of around 8 hours there.

On our first day we really just got our bearings by walking around the pyramids and checking out the Sphinx. It’s within a kilometre of the Great Pyramid so it’s all easily walkable. The sphinx was really cool and it was pretty incredible to see something so iconic in person. 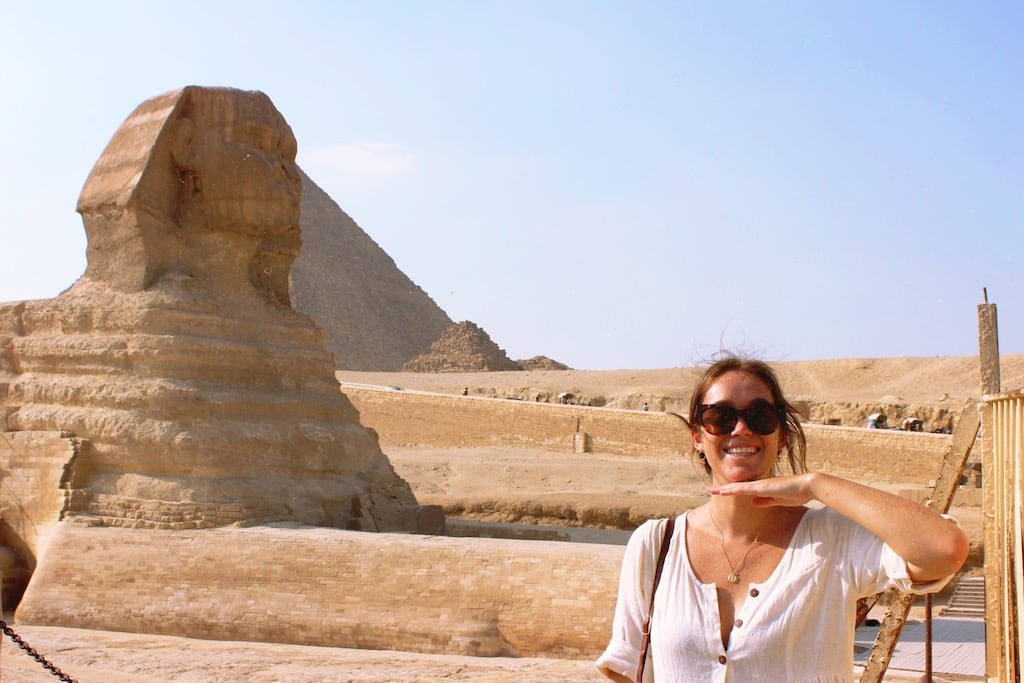 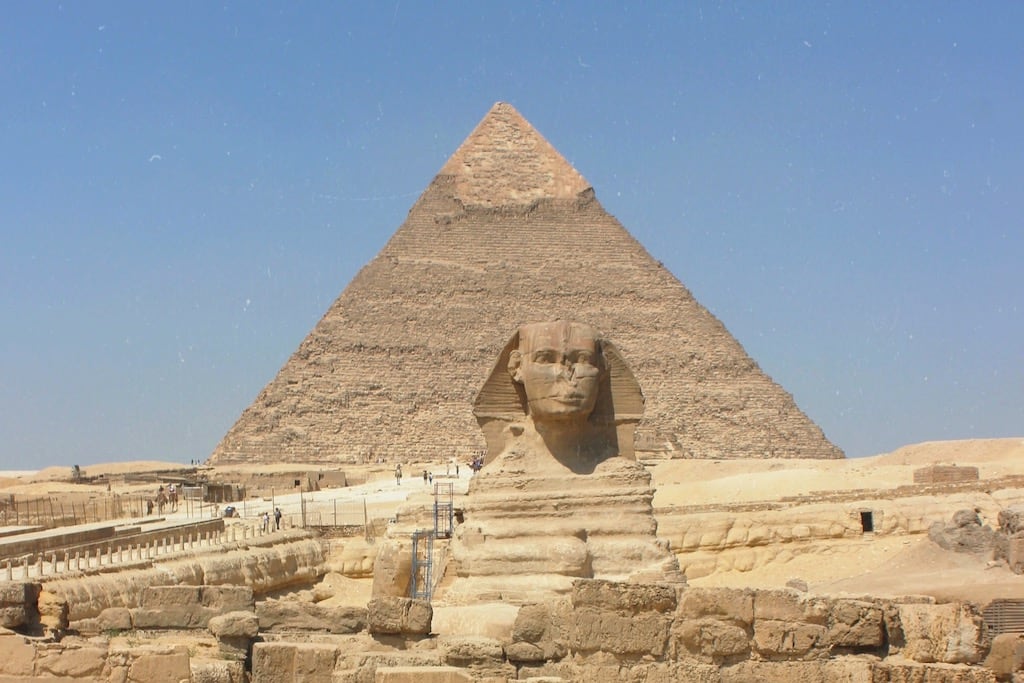 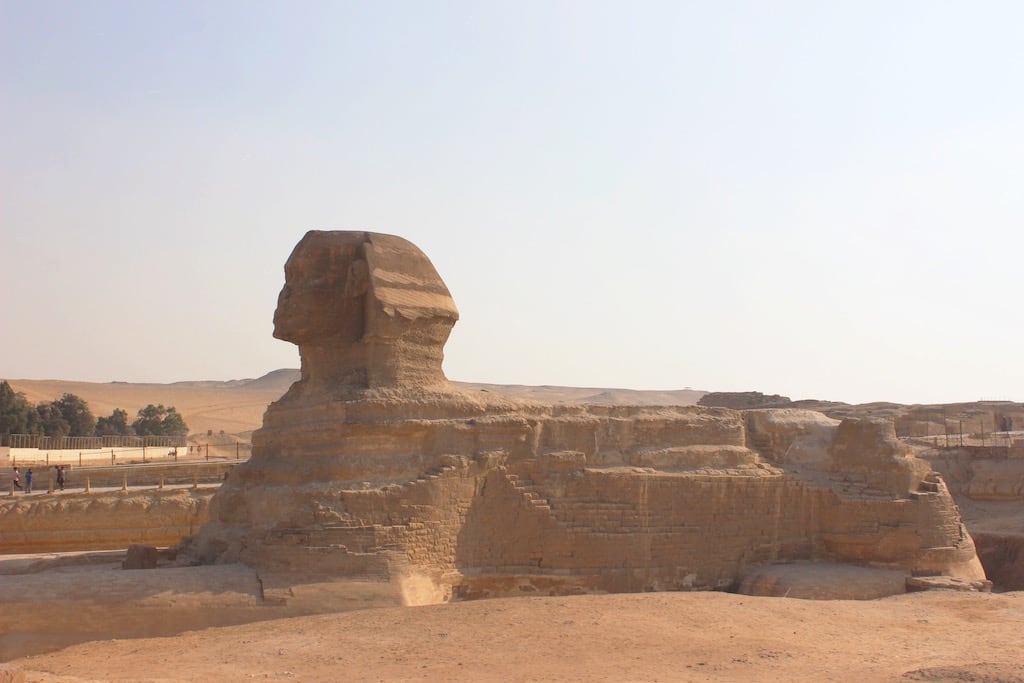 On our second day, we decided to go inside the Great Pyramid. It was one of the most claustrophobic environments I’ve ever been in; think 50 degree temperatures, extremely narrow passageways and dim lighting. We climbed up into the pyramid and when we finally reached the top, there was a small concrete room with nothing inside – it was kind of anticlimactic. Everything that was once housed within this pyramid was either stolen or is now housed in the Egyptian Museum.

We also walked out to an amazing viewpoint where you can see all nine of the Pyramids of Giza. Most people ride camels out to this viewpoint but we weren’t keen to do so so decided just to walk. Everyone must have thought we were crazy, opting to walk for an hour in 37-degree heat to get there, but there was actually a little breeze and it was quite a pleasant walk. The camel-owners are doing it tough since there are barely any tourists and the price for a camel ride is pretty low (150EGP for 2 hours which is ~$7AUD per hour). We met a really nice camel owner who was desperate to make a sale so that he could buy enough food for his camel so we ended up just paying him the price of a camel ride to walk with us out to the viewpoint – this ended up being cool because he was super into politics and we learnt so much about Egypt pre and post the 2011 revolution. 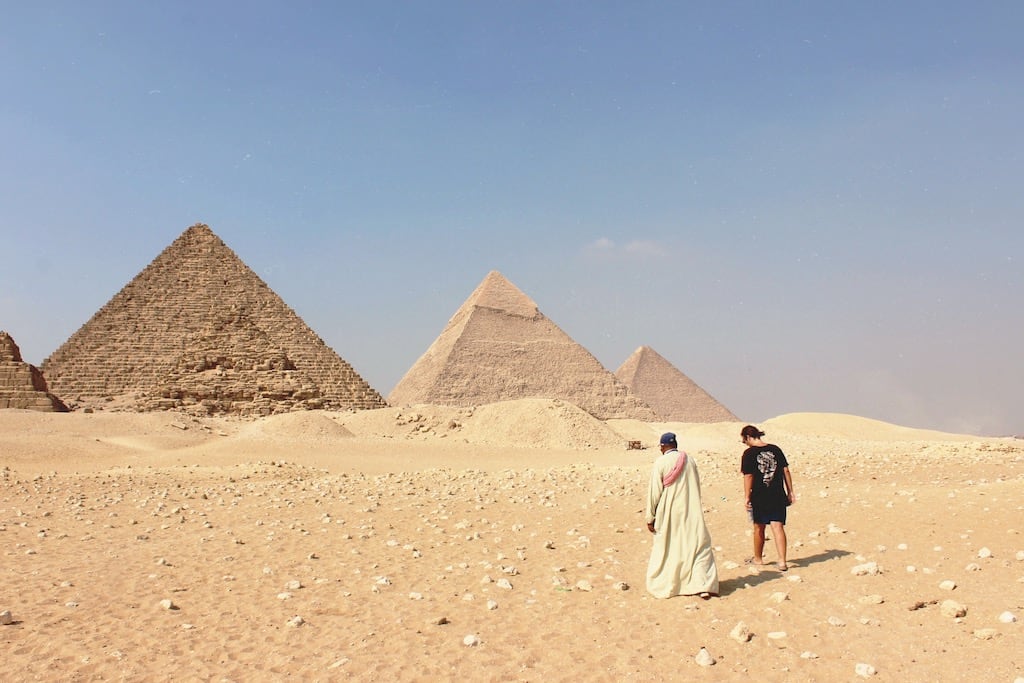 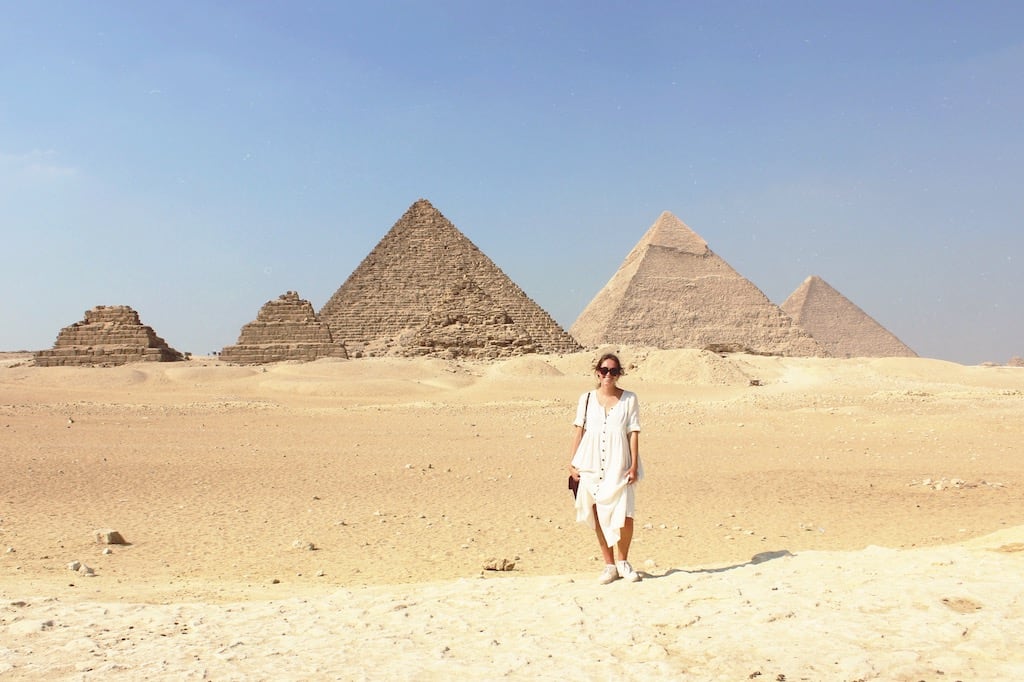 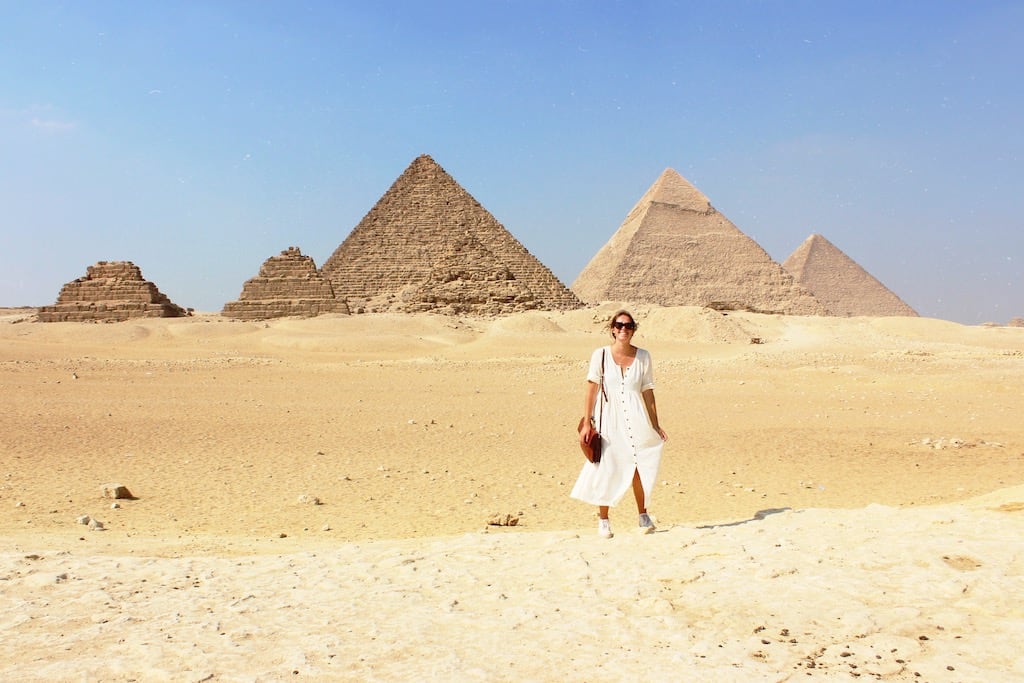 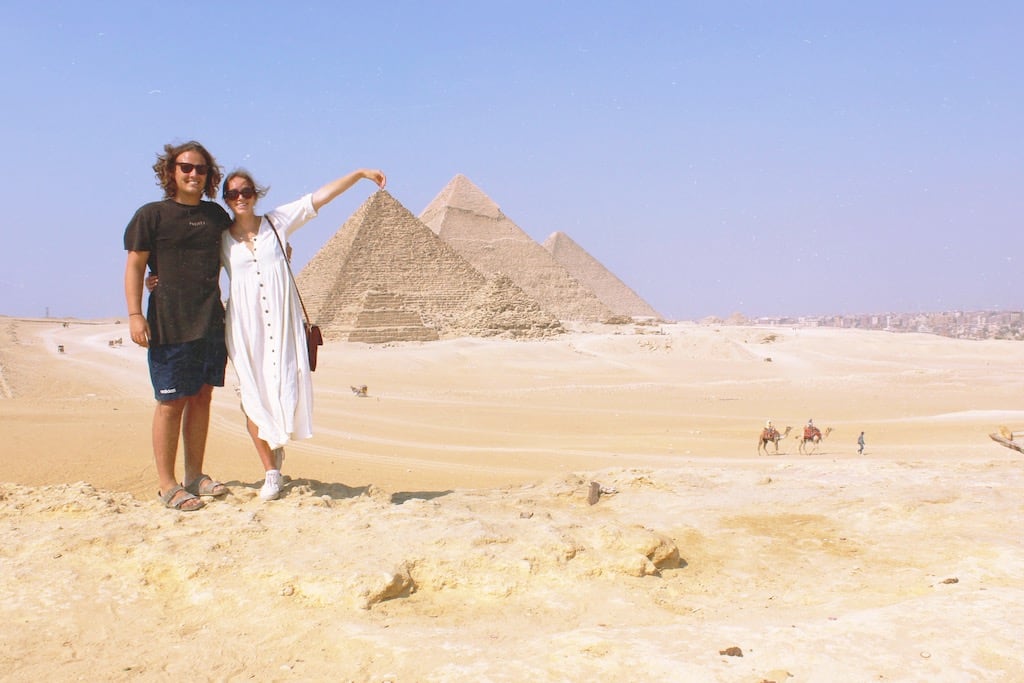 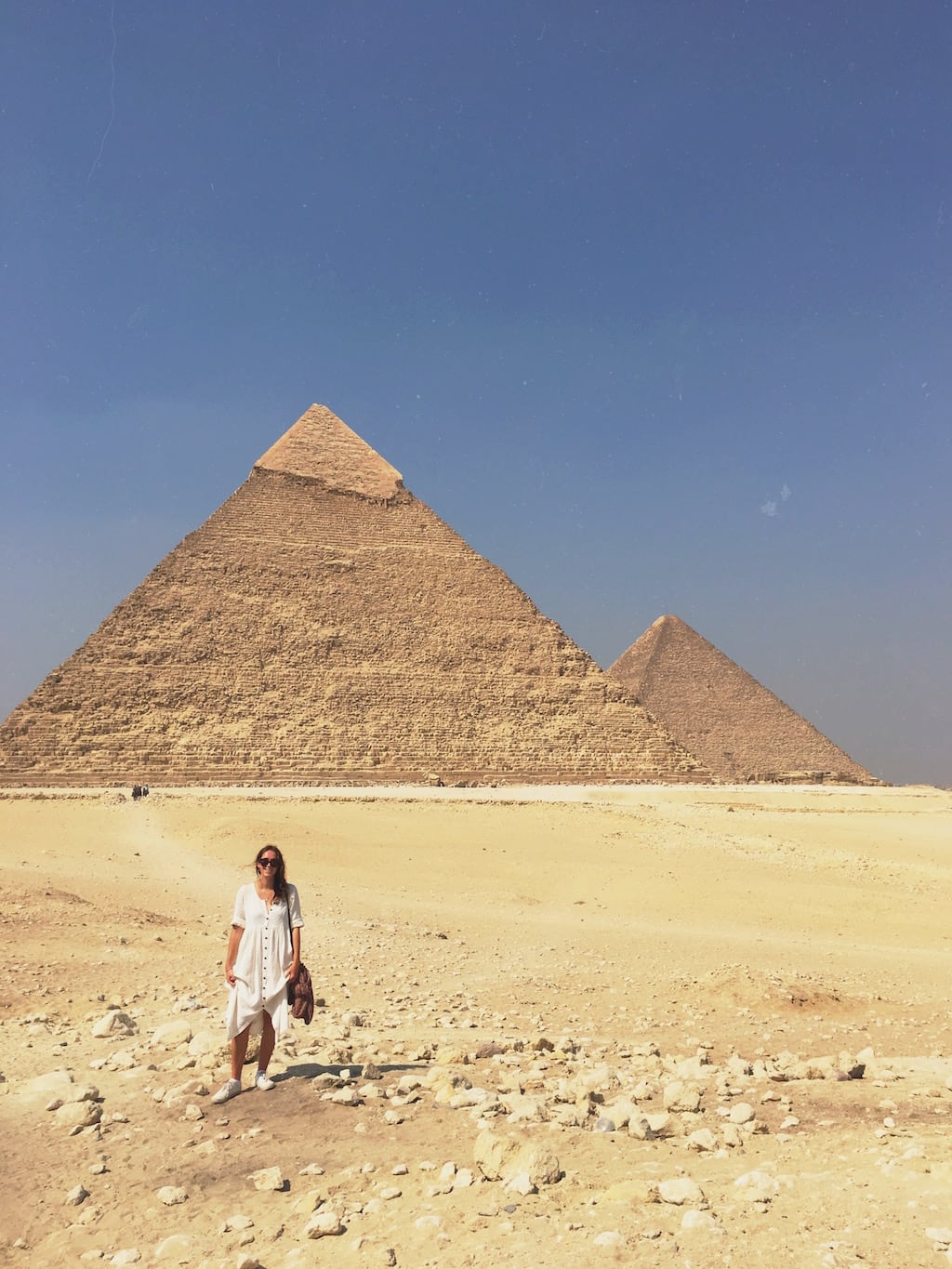 Once we were back in Cairo, we visited the Egyptian Museum. It’s a pretty amazing place and it’s incredible just how many ancient artefacts there are housed within the one building – mummies, the gold mask of Tutankhamun, hundreds of statues of Egyptian gods. If you’re an ancient history buff, you could easily spend an entire day inside, and even if you’re not, it’s still an interesting place to spend a couple of hours. The museum isn’t air-conditioned though, so if you visit in Summer, prepare to overheat – we really struggled to enjoy ourselves properly since we were practically melting. I would also suggest getting a guide as barely any of the artefacts have information labels. Entry was 60EGP (~$6AUD). 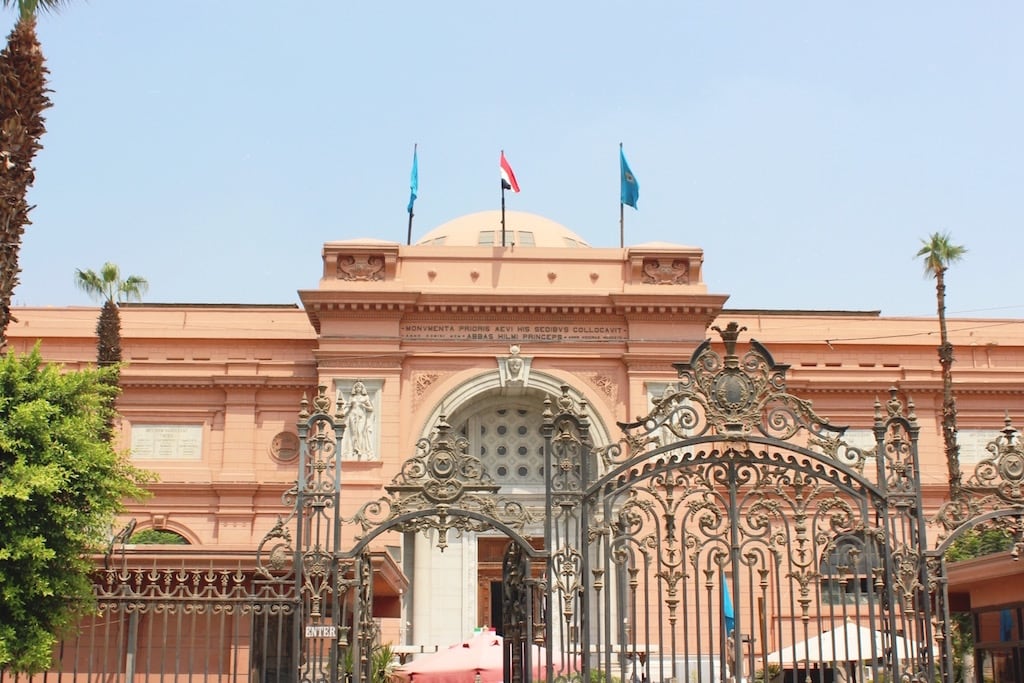 We spent a few hours one afternoon relaxing in Al Azhar park and it was the perfect respite. If you’re feeling overwhelmed by the hustle and bustle of Cairo, it’s a really lovely place to spend a few hours relaxing, whilst still being right in the centre of Cairo. The park is filled with families picnicking, children playing in water fountains and young couples. It really showcases Egypt as a family oriented, friendly country. Entry was 20EGP (~$1.50AUD). 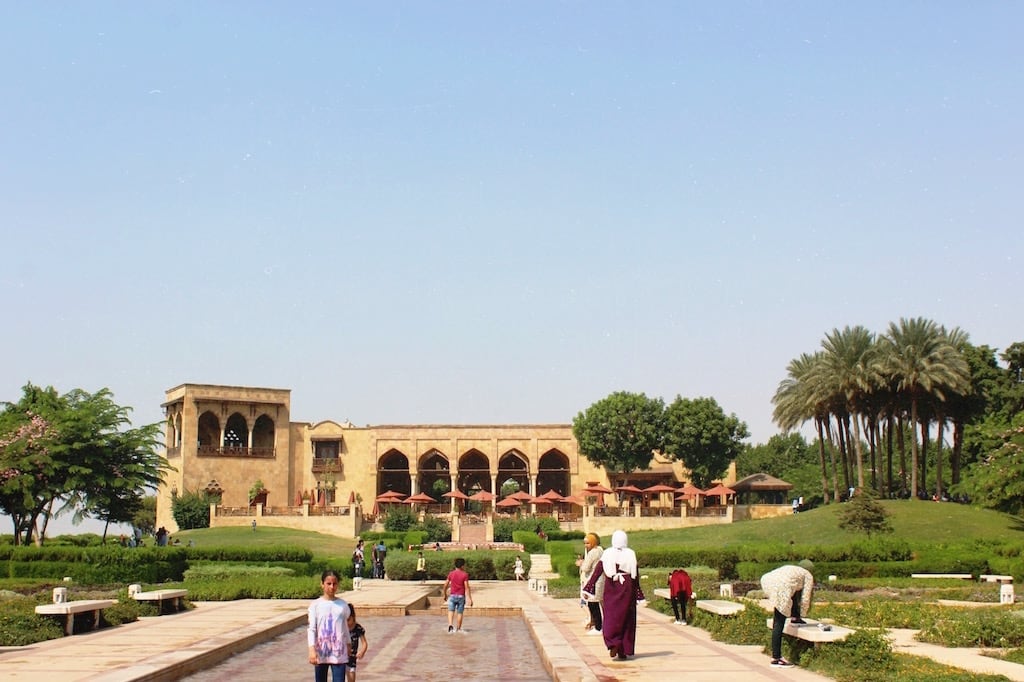 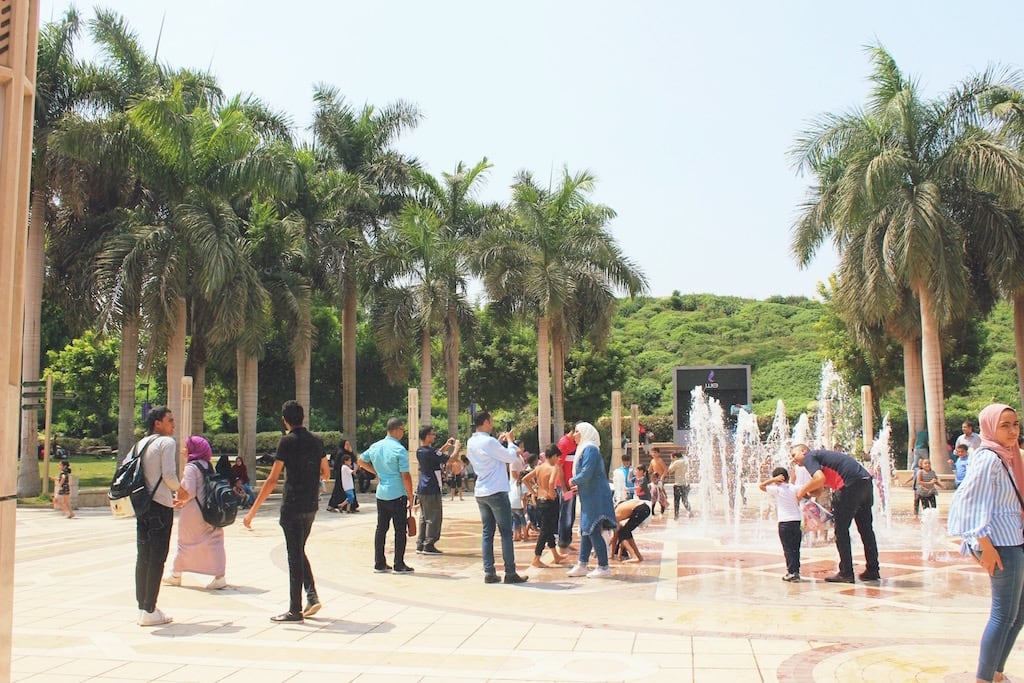 We also just wandered around what’s known as ‘Islamic Cairo’ and checked out some spice markets, gold shops and a few mosques. 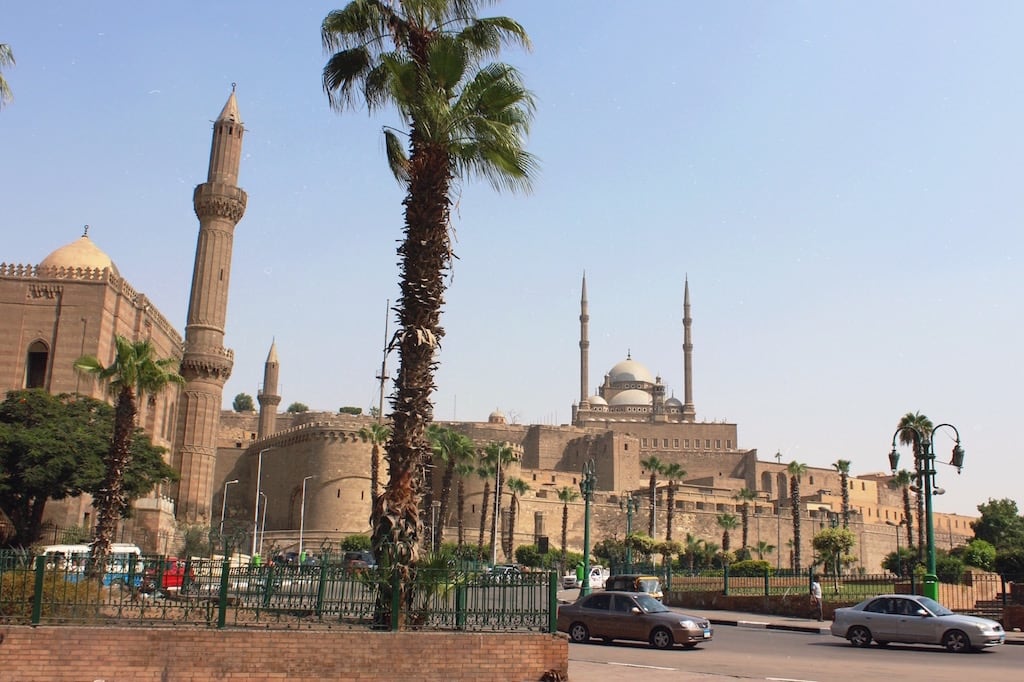 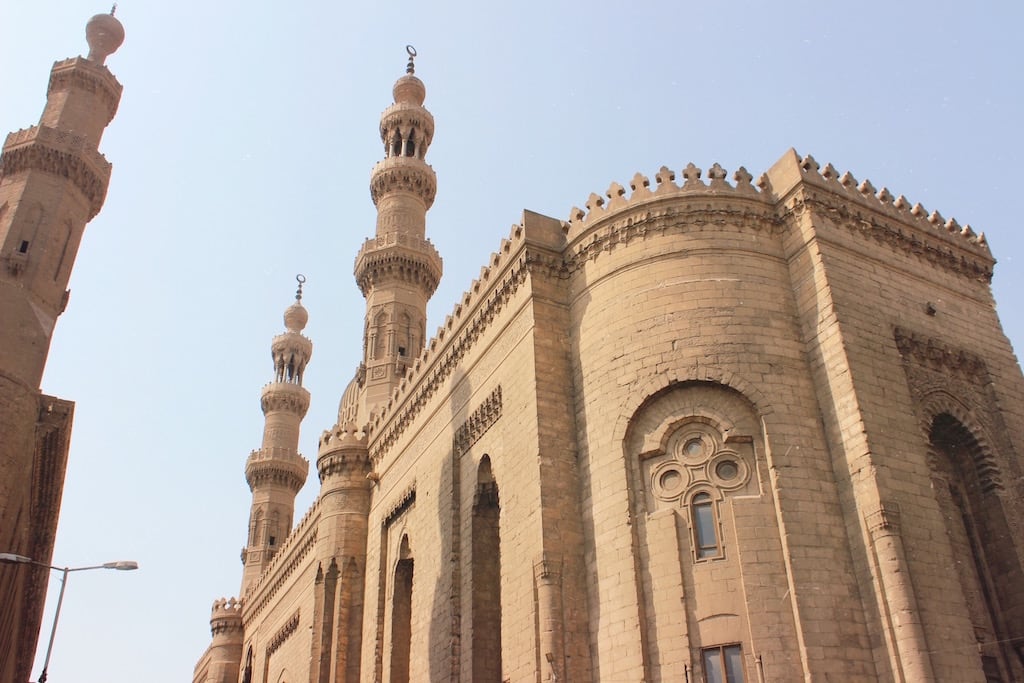 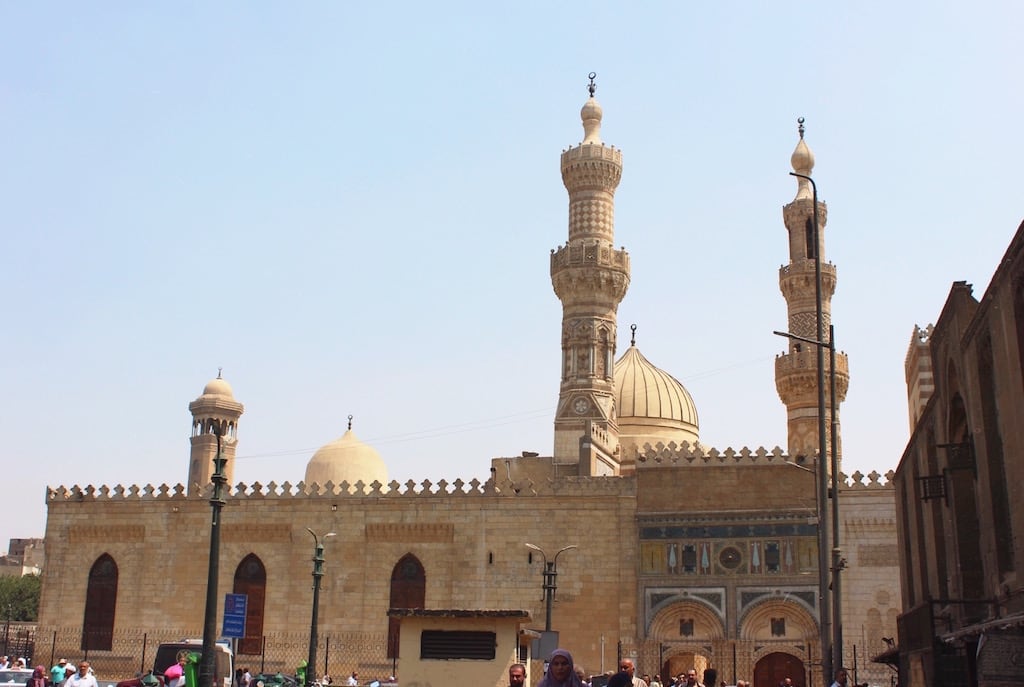 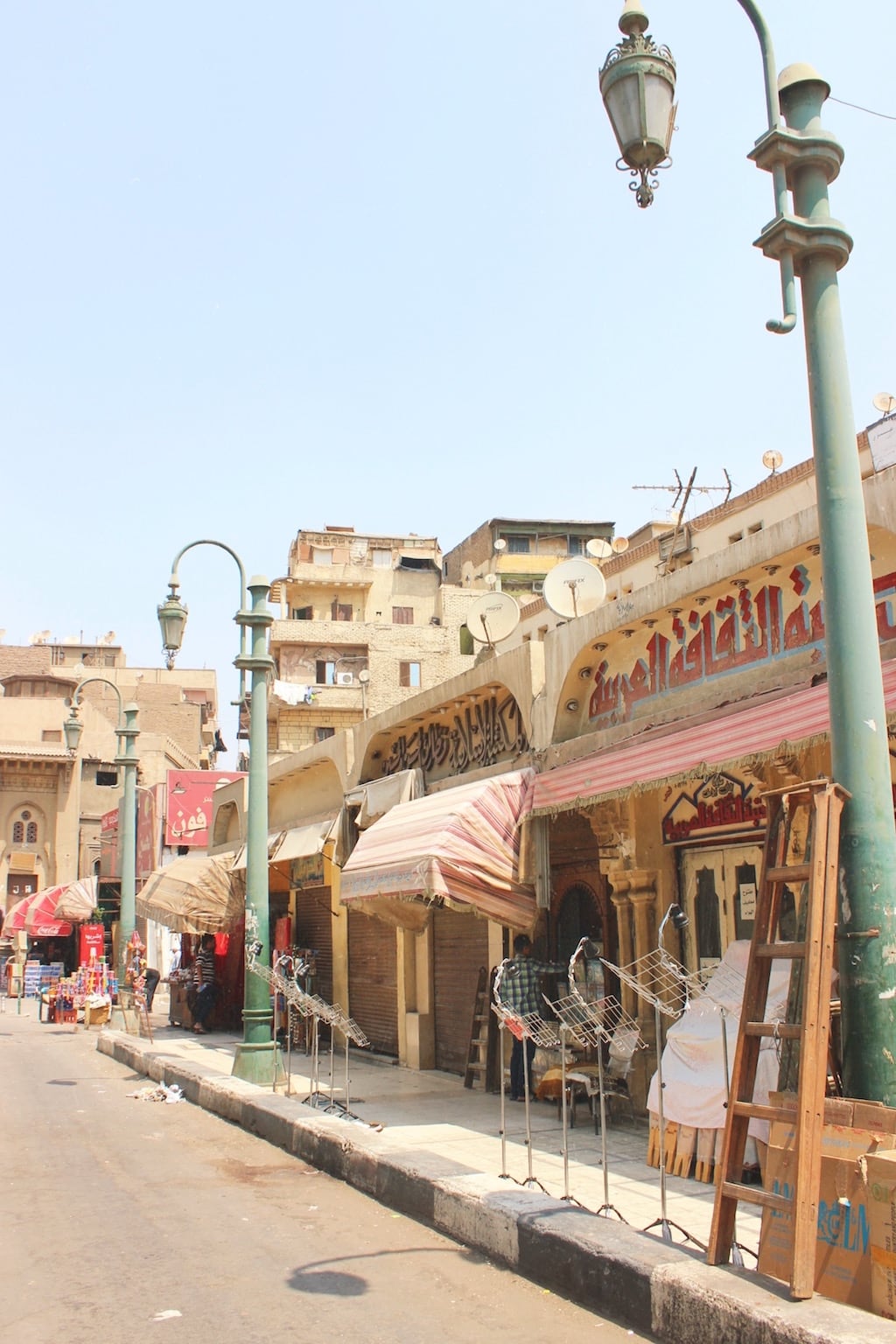 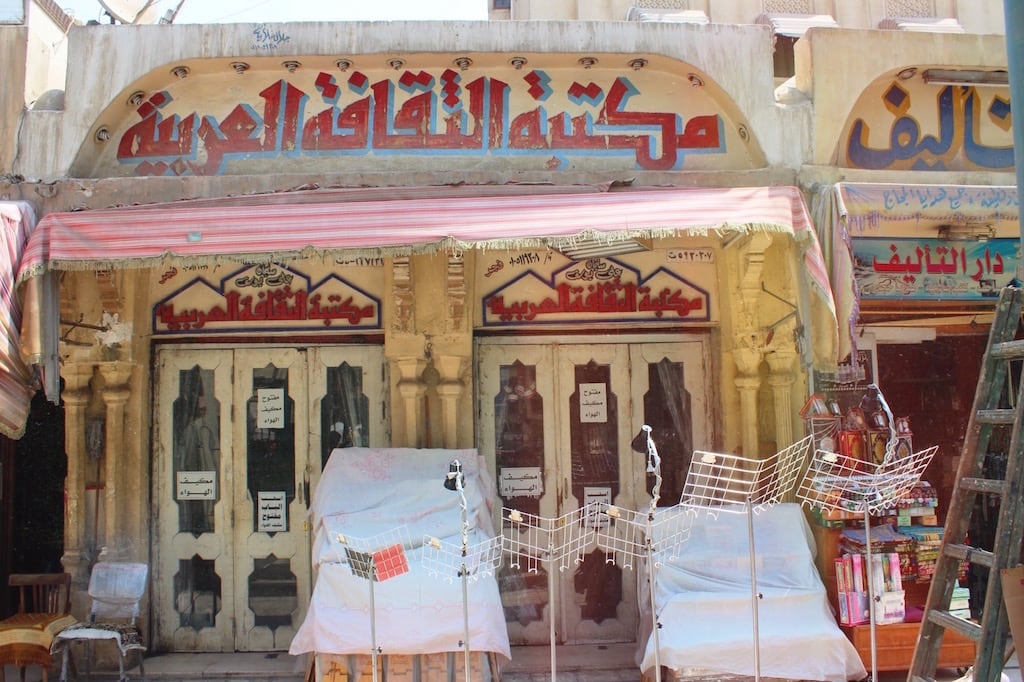 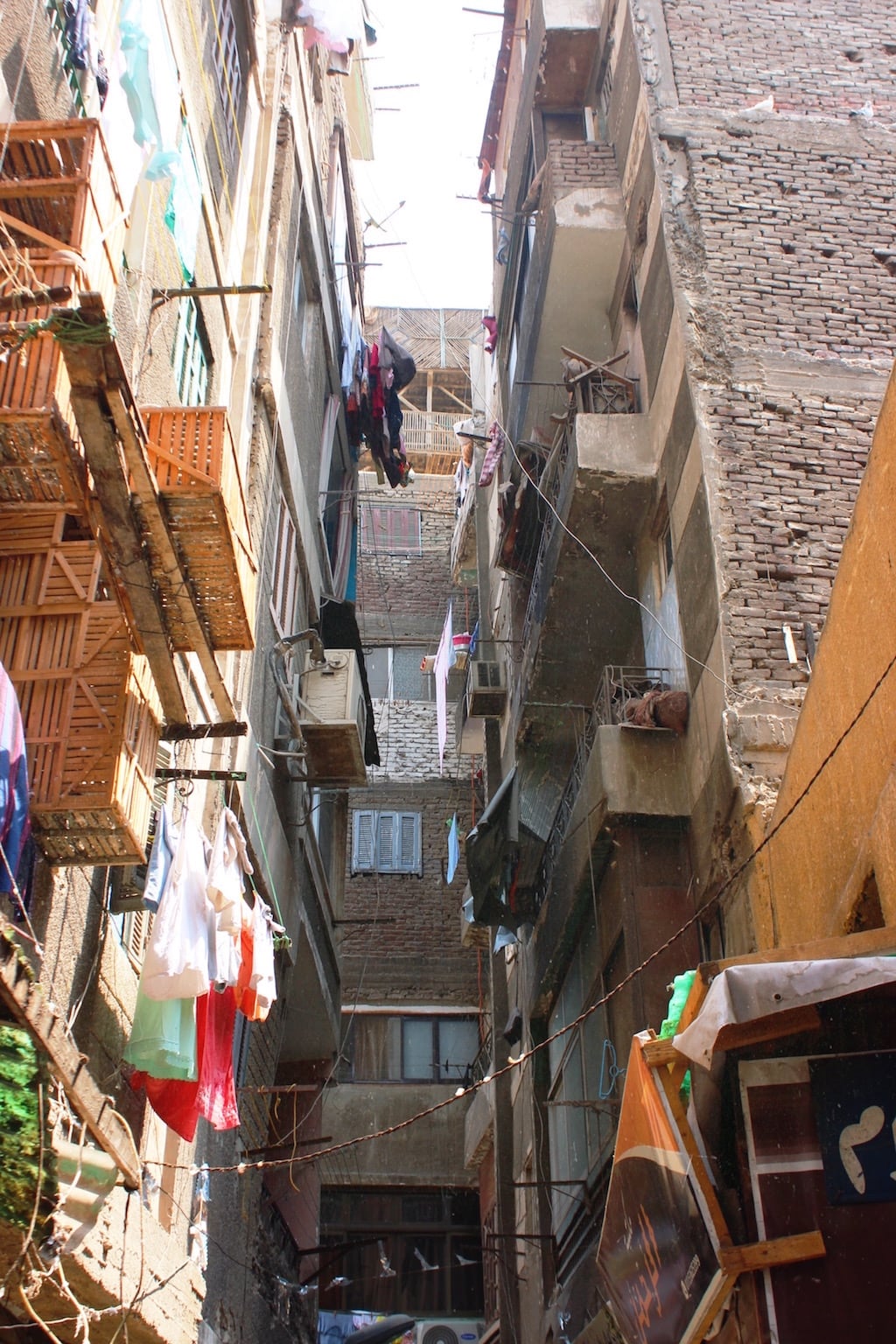 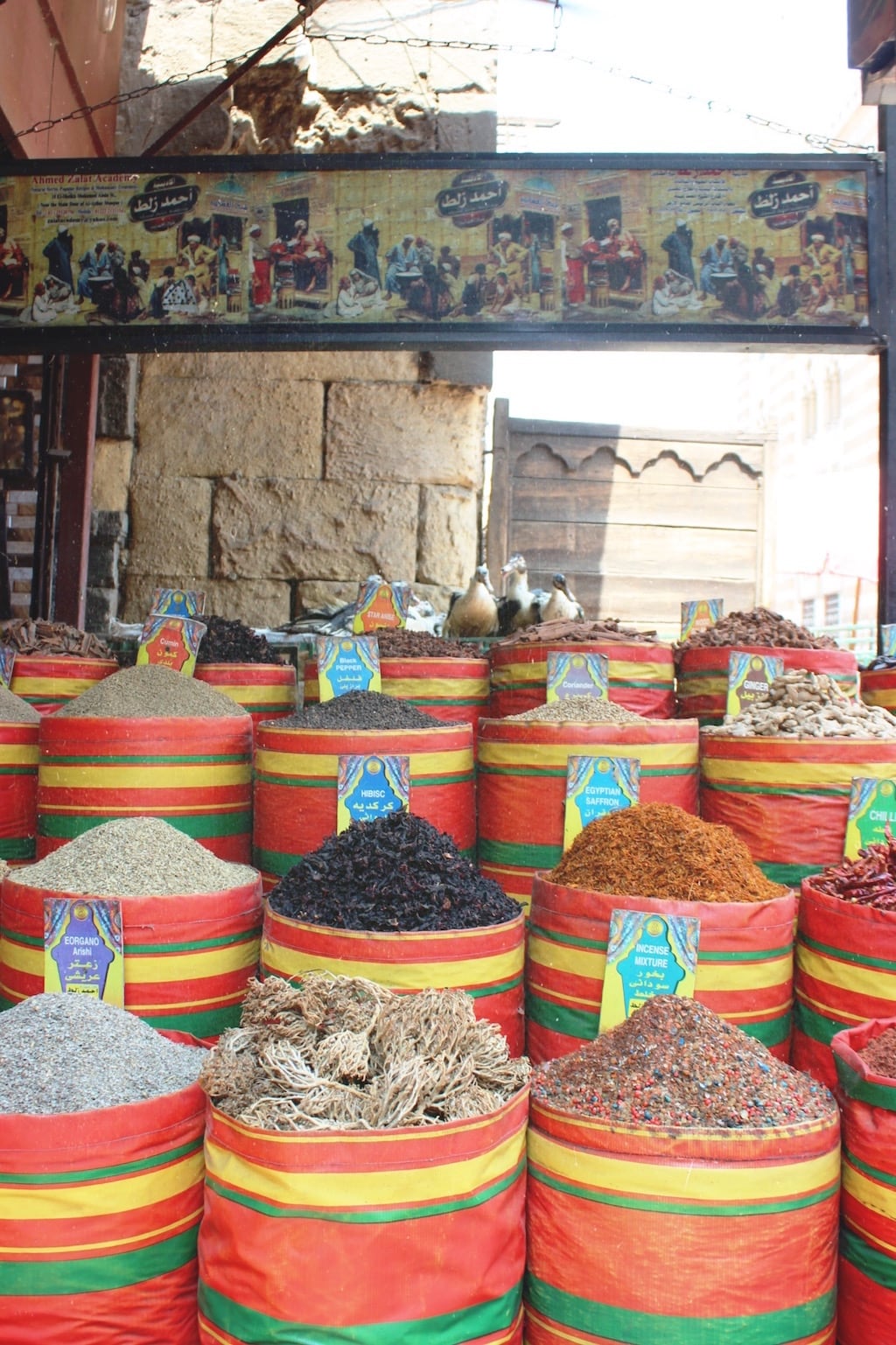 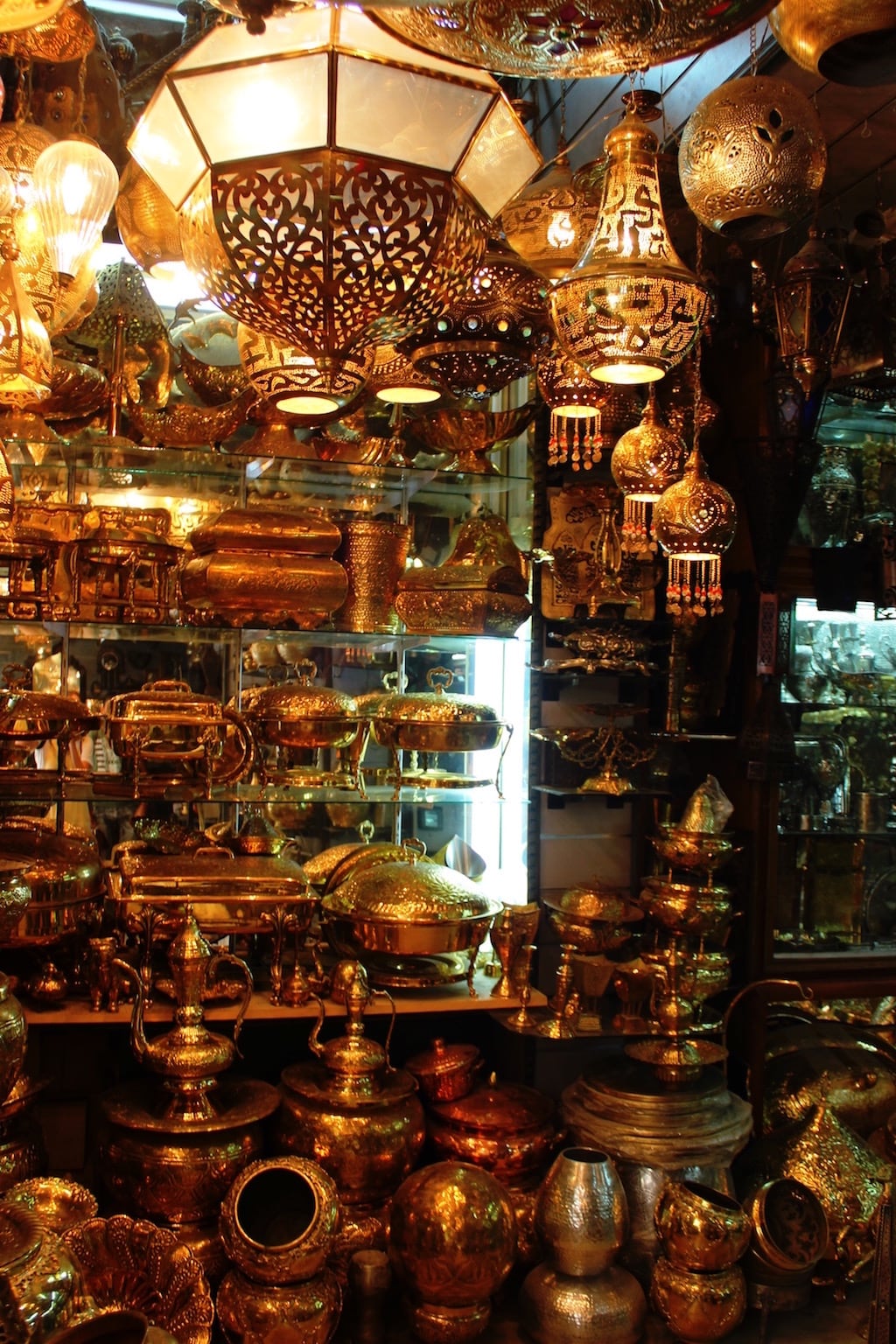 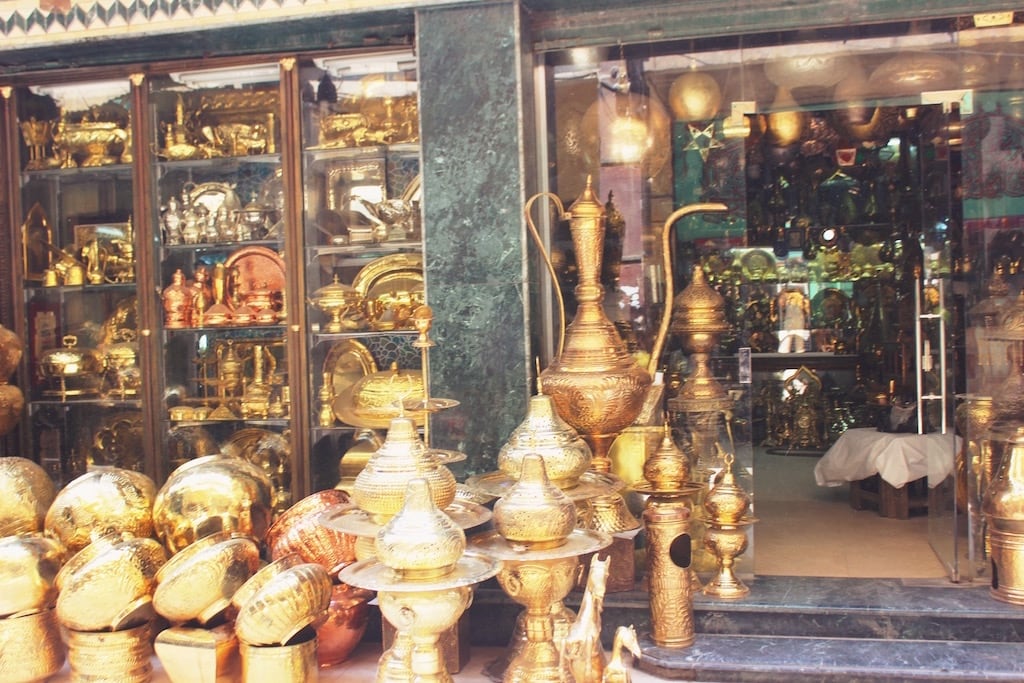 Egyptian food is gooood! Just like other areas in the Middle East, falafels, accompanied by pickles, hummus etc., are the go to option if you’re veg. While we were staying at Mena House, we did also eat some really good Indian as well as a tasty risotto.

In central Cairo, you can’t go past Kazaz! It’s a fast food restaurant but serves authentic Egyptian food and is seriously popular with the locals. Falafel pitas were 2.25 EGP which is literally less than 20c! This meant that we could both eat a meal for less than $1AUD which is pretty crazy. An added bonus was that it was only 100m down the road from Meramees Hostel, and for a small fee we even got it delivered one night.

How we got to & from Egypt

We travelled overland in and out of Egypt seeing as we were already in the Middle East. Into Egypt, we travelled from Aqaba, Jordan to Cairo which took a total of 17 hours. Out of Egypt, we travelled from Cairo to Jerusalem which took a ridiculous and exhausting 25 hours. If you want to know more about this option, I’ve written a dedicated blog post about the logistics of traveling overland through Jordan, Israel and Egypt. 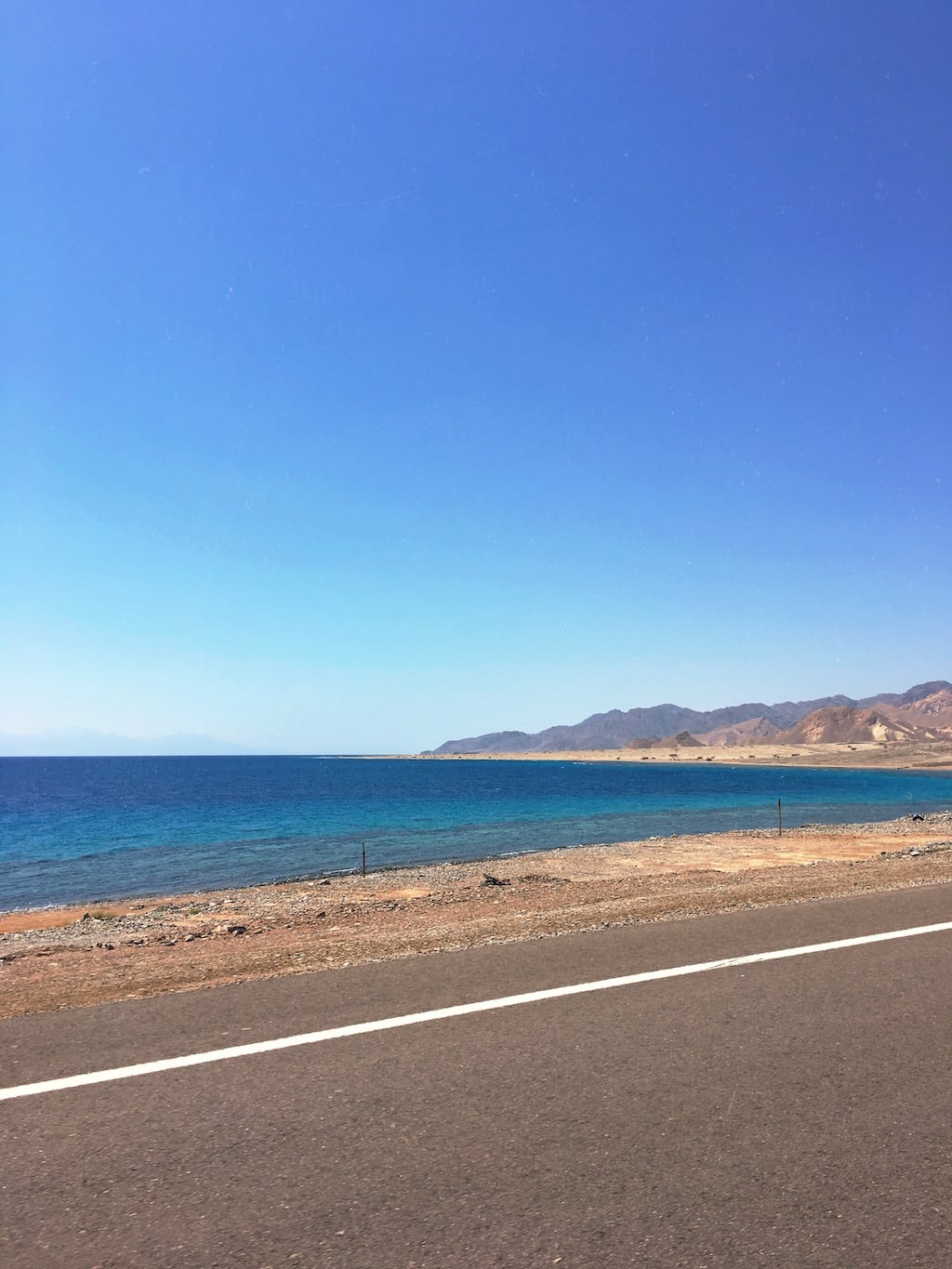 If you want to do a trip just to Egypt, I was surprised to find out that it’s relatively inexpensive to fly into Cairo from Europe: you should be able to get return flights from Athens, Rome or Paris for around $350 AUD (Aegean Airlines is your best bet).

We arrived in Egypt on Monday 27th August and crossed back into Israel on Saturday 1st September. Across our six days in Egypt, we spent $515 each. This would have been significantly cheaper if we hadn't decided to splash out on nice accommodation. Not including getting to/from Egypt, if you stayed in a hostel the entire time, I think that budgeting $25AUD per day is reasonable. This is the breakdown of what we spent:

Transport: 220 EGP (~$17AUD) per person. We took no public transport and barely walked because it was so hot. This price is based on taking taxis/ubers everywhere.

Food & Water: 870 EGP (~$68AUD) per person. We ate half our meals at the super budget Kazaz, but the other half of our meals were eaten at Mena House which was considerably more expensive.

Accommodation: $267AUD per person. This was for two nights in a budget hostel (~$23AUD) and two nights in the much more expensive Marriott Mena House ($244AUD). Our time in Egypt would have been considerably cheaper had we stayed all nights at Meramees.

Sightseeing: 560EGP (~$43AUD) per person. This includes entry to and sightseeing around the pyramids as well as all the entry fees we paid in Cairo.

Traveling to and from Egypt: 1525EGP (~$120AUD) per person. I wrote a detailed post on how we travelled from Jordan to Egypt and then back to Israel here which covers a breakdown of costs.

If you're from Australia, you need a visa to enter into Egypt. We applied for our visa in Aqaba, Jordan which only took ~6 hours. It cost 22JD (~$42AUD). You can also apply for an eVisa here.